The Irish Research Staff Association, an association that represents research staff across the island of Ireland, held its annual forum on Tuesday 21st June. It was great to see a good turnout, including PhD candidates, research scientists in industry and civil servants as well as university research staff.

As Chair of the Association, I opened with a brief speech before introducing Gordon Dalton, Chair of International Consortium of Research Staff Associations, to chair the first session. Gareth O'Neill, Technopolis group, has been representing researchers for many years, including with Eurodoc. He discussed the broader European framework for different categories of research staff. He highlighted challenges of research careers and staying in academia; although surveys generally show high rate endorsing a wish to stay within academia, this is becoming increasingly competitive. There are differences internationally-a good example is whether PhD candidates are treated as staff ((as they are in the Netherlands) or students (as they are in Ireland). If they are staff members, they get a number of entitlements that don't apply to students.

Slaven Misljencevic, policy officer at Research & Innovation actors and research careers unit in the European Commission, spoke about the European labour market, and how mobility is cornerstone in establishing a European Research Area. He highlighted the work of Euraxess, a European portal with a database of jobs and funding opportunities. They have over 19,000 registered organisations, and an average of over 80,000 job posts(!) (Often used when the employers don't have an internal candidate lined up). Slaven also discussed RESAVER - an international, multi-employer fund that allows international researchers to bring their pension between different universities in different countries (however, not all universities are signed up to it).

The first session had a lively discussion and Q & A - Tara Hughes (UCD) joined the session. She flagged the lack of exit data in universities in terms of staff who move on from a given university. Máire Brophy (TUS) said that what we lack in Ireland is a clear pathway to independence as a researcher; greater funding is required for this. She said she would like to see a full chart of where to go at what stage in a researcher's career, as there are still some gaps. The possibility of core funding for researchers was raised by Joan Donegan, former secretary of the Irish Federation of University Teachers (IFUT).

The second session focused on equality, diversity and inclusion, with a particular focus on gender equality Dr Arjumand Younos, who works in industry, was the first speaker. Like many researchers who started off in a university, she segued from academia into industry, though she still teaches in universities. In a talk about how "the rich get richer", she made a point about how, in social networks, people with more connections get more connections, more citations get more citations etc. Dr Younos also spoke from personal experience of family responsibilities, and that other staff may unfairly perceive someone with such responsibilities as less of an asset to the team - indeed, staff can be under pressure to not start a family. The session was somewhat disrupted as it seemed to be hacked, and had to be closed to new guests entering.

Our final speaker, Joseph Twist, spoke about university staff increasingly having to be flexible in response to changing job contexts. He highlighted figures internationally - generally staff are on relatively precarious contracts. Like Dr Younos, he spoke from personal experience as well, in terms of his own difficulties with precarity earlier in his career. He pointed out the issue of two-tier system, where some people are well paid and very secure in their work. Pointed out that trade unions and grassroot networks, like the Irish Precarity Network, Postgraduate Workers Alliance, were a means to advocate for better conditions. There was some discussion about EDI - people may not be able to tick all the boxes if they've had a lot of adversity. Máire Brophy mentioned she had a SALI appointment which was in part created to address some of the imbalances. Joan Donegan suggested maybe we're hitting a turning point where research staff will start to get more organised to advocate for a better future.

In her closing comments, Joan Donegan mentioned how the work of researchers in developing the COVID vaccine, which built on decades of previous research work, really underscored the importance of researchers. Joan lamented the move towards more of a business model in universities. Although I think there's a lot of good in preparing students for employment, Joan also referenced the ongoing cuts to recurrent funding post-austerity, precipitating funding crisis. There has been a large reduction in core staff numbers with this. Joan also mentioned the increased monitoring of HEI's by government-this contrasts with Irish Universities Act 1997, academic freedom etc. On a related note however, Joan highlighted that the government, particularly the Department for Further and Higher Education, Research, Innovation and Science, aims to reduce precarity. I think these closing comments highlighted the need for research staff to come together to advocate for better working conditions, as well as to collaborate.

Posted by AndrewAllen at 1:37 PM No comments: 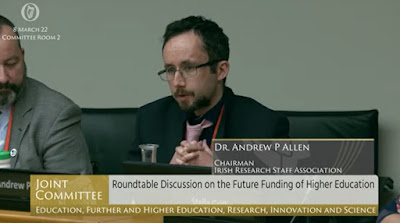 On Tuesday 8th March, I gave an opening statement on behalf of the Irish Research Staff Association at a Roundtable discussion on the Future Funding of Higher Education at the Oireachtas, at the Irish government building. Here it is:

My name is Andrew Allen and I am the Chair of the Irish Research Staff Association, which represents salaried research staff in Higher Education.

Research is an investment that consistently makes returns that are greater than what we put in. Studies from the Science Foundation Ireland, Indecon and University College Cork estimate that for every euro invested in research, society reaps a benefit of three to five euro back to the economy. Research staff bring funding into universities, contribute to internationalisation of higher education, help to inform evidence-based policy and, although this is often under-recognised, contribute to teaching as well.

Research careers in HEIs are currently characterised by precarity, with research staff generally being employed on fixed-term contracts tied to specific research grants. The high turnover of research staff within the HEI sector means that experience is often lost from this sector. Research staff can also end up devoting a significant amount of time to chasing research grants where only a small number of candidates will succeed. Given that Ireland has a demonstrable track record for producing long-term research (e.g. the study on which I am employed, The Intellectual Disability Supplement to the  Irish Longitudinal Study on Ageing), we should avoid precarity becoming part of policy.

Coming from a background in psychology, I’m glad to see that mental health is on the agenda. A systematic review and meta-analysis found that job insecurity is associated with higher risk for depression and anxiety (Llosa et al. 2018). Precarity reduces the health and well-being of research staff, and their productivity with it. It harms not only individual researchers, but research groups and programs who have higher brain drain.

In order to inform any policy making decisions regarding research and innovation it is firstly important to develop an accurate method of data collection regarding the numbers of research staff that is universal across all HEIs on the island of Ireland. Data on gender, ethnicity, international/ national status, level of seniority and contract type must be tracked over time and should include career outcomes of the researcher. Where there is aggregated data, it should be made easily available, to the greatest extent permitted by data protection law. Research staff should be able to communicate with large numbers of their peers quickly and easily, in order to maximise the potential for collaboration and avoid duplication of research effort.

In terms of policy, research career frameworks are important for research staff. At the moment, a number of policies have been proposed that take an “up or out” approach, whereby research staff have to progress to a higher level within a relatively short period of time, or exit the system. Why is this problematic? Let’s look at the “up” part of “up or out”: Career progression is a good thing, but there is a lack of funding in place for research staff to progress.  So, they use increasing amounts of labour hours, paid for by the taxpayer, chasing increasingly competitive grants that they’re less likely to get. Research staff who are generally least able to absorb risk, are the ones who take on the bulk of the risk. And what about the “out” in up or out? Some researchers may wish to stay within a particular role at a given level, drawing on years of experience to perform high quality research, but risk being pushed out of the system when we take an “up or out” approach. The Higher Education Research Group has previously proposed a funded research framework in the late noughties; this is a model we should bring back.

A possible solution to enable research staff to continue contributing to academic research is for funding agencies and HEIs to put in place staff scientist positions (and equivalent positions for arts and humanities), thereby creating alternative attractive career progression routes within academia. A report from the National Research Council (2014), for example, recommends raising the salaries of research staff to “appropriately reflect their value and contribution to research”. Unless the career prospects for early career researchers are improved, we risk losing the talent that will be essential for our future progress across all areas of research.

Alternative career paths, where research staff segue into roles more focused on other areas such as teaching or professional services are to be encouraged, but they should not be seen as the necessary goal of all research staff.

I’m here today not simply to advocate for research staff, but for a sensible policy of investment that benefits everyone. Given the return to Irish society evidenced by research, we know that investment in retaining research staff is a win-win. I look forward to participating further in this process.

Posted by AndrewAllen at 9:24 AM 2 comments: