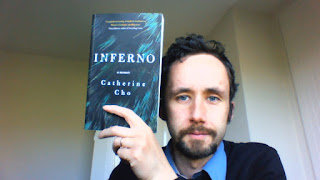 People ask me, 'What was she like?' and I try to figure out if they mean as a normal person...Mostly though, they mean what was she like before she went crazy, as though their own mother might turn overnight, like a bottle of milk left out of the fridge. Or they might, themselves, by secretly askew.

Postpartum psychosis is relatively rare, but can have devastating effects. Symptoms can include paranoia, manic or low mood, delusions and hallucinations. In Inferno, literary agent Catherine Cho describes her own experience of psychosis following the birth of her first child.

Her experience in the psychiatric ward is generally de-individuating; this changes when a number of patients discuss their autobiographies, although some longer-term patients appear uncomfortable with this activity. At times, her stay in the psychiatric ward seems as much a purgatory or limbo as an inferno, with Cho unsure of how long she will remain in the ward, or how to behave, second-guessing what the staff and other patients are thinking about her. When the psychosis has faded, the author seems to face a double-bind in terms of wanting to present herself as reasonable and calm, but then worrying she is not acting "upset enough" about being separated from her baby.

An interesting observation is that Cho's Korean heritage doesn't seem to be so salient until she becomes a mother. Inferno tells folk stories that touch on femininity and sacrifice in the Korean imagination, as well as stories of Cho's grandmother, who had wanted Cho's own mother to be a boy. Memory and identity are key themes in Inferno. The narrative alternates between Cho's time in the ward and her earlier autobiography. The psychosis itself is initially only recalled in dribs and drabs, although details are shaded in over time. Separated from her son in the ward, her new identity as a mother seems unlike a part of herself. Cho recalls an incident earlier in her life, when she saw her reflection immediately after a savage beating from a former partner, and how she disassociated from herself at that time. The matter-of-fact description of these thoughts and memories contrasts with the sometimes slippery nature of Cho's grip on her sense of self.

Though certain factors increase one's risk of developing postpartum psychosis, its cause is still not well understood. Cho discusses the incidents preceding the onset of her psychosis. It is suggested that the stresses of new motherhood and the overbearing behaviour of Cho's parents-in-law are causal at some level to the onset of her psychosis. At the same time, Cho offers her own insights into the neuroses of her parents-in-law rather than playing a simple blame game, and as a reader one wonders about the impact of the earlier, abusive relationship on the author. One is left with an unsettling feeling that this could happen to any woman, and the anxiety that it could happen again (postpartum psychosis following a previous pregnancy is a risk factor).

The prose is spare and to-the-point, and though unflinching in its depiction of the fallout of postpartum psychosis, the book will hopefully dispel some of the taboo around this subject. It should also offer some hope to those who know (or will know) someone going through such an experience.

Related posts
Book review: "A girl is a half-formed thing"

Posted by AndrewAllen at 4:13 AM