The Zoo of the New: Innovation in Universities

The following article (including the pic of me in my PhD office) originally appeared in The Psychologist's "New Voices" section in 2011. It is reprinted here with permission. 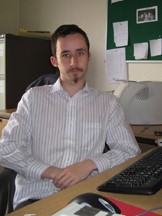 Despite the image of the university as a hub of learning and imagination, many of its inhabitants feel that they are failing to use their creativity to bring about something useful. They may look at their research and see the same technique being applied to trivially differing questions. Others read through a syllabus, see that it’s not engaging and yet do not know what to do with it. And yet pressure to be more innovative seems to be everywhere; for example, the “New technology, innovation and skills investment” webpage of the Economic and Social Research Council (ESRC, 2009). They note that much of the ’s value added is coming from high-tech manufacturing and, more relevant for psychologists, knowledge-intensive services. But what might help or hinder organisational innovation? And in whose interest is it that universities become more innovative?

Creativity and/versus organisational innovation
For this discussion, I will refer to organisational innovation(s) (OI) as creativity that enhances income and/or organisational efficiency. Simonton (1988) has argued that creativity requires social persuasion. Although such a strong view is obviously controversial, dissemination of an idea is a typical part of the creative process for many creative people. Most theorists of creativity (though not all; c.f. Weisberg, 2006) suggest that the main criteria for creativity are novelty and usefulness. A creative thought that becomes an OI can be thought of not only as having been disseminated, but as also having passed the test of usefulness.
Sharing an idea is all well and good, but some may baulk at the idea of a creative idea needing to prove itself in the workplace or marketplace. Nonetheless, creative ideas need to overcome organisational barriers in order to manifest themselves as innovation (c.f. De Dreu, Nijstad, Bechtoldt, & Baas, 2011). I would argue that, for example, turning an idea into a marketable product is sufficient for meeting the usefulness criterion, but not necessary. Figuring out how to make an idea appeal to others can contribute to the creative process. Indeed, Boden (e.g. 2004) has argued that constraints are what make creativity possible. Constraints placed on thinking create a conceptual map of creative possibilities; breakthroughs can come by explorations of these conceptual spaces (and at the boundaries, where the rules can be bent). Turning one’s idea into OI will create new constraints (e.g. “laypeople” need to understand this thing in the way that I do) and these can help to refine one’s ideas.

OI and creativity in psychology
As scholars of the mind we should be able to generate useful ideas and apply knowledge about creativity to our own work. To take an example of relevant research, surveys of R & D employees has found that time pressure hinders creative outcomes, but only in organisations with a strong innovation climate (Hsu & Fan, 2010). This could have clear implications for universities that have committed themselves to fostering an innovative climate (although applying this finding may not always be easy).  A series of experiments have indicated that thinking on behalf of others tends to lead to more creative thinking (Polman & Emich, 2011). Asking colleagues for their opinion may thus lead to more original work if one takes their advice.
Psychological research on creativity is obviously useful, but broader psychological theories of creativity can also contribute to the debate. Both Boden (2004) and Weisberg (2006) have argued that ordinary thought processes are sufficient for the creation of creative ideas. The implication is that most people have the potential to develop OI – someone’s creative ability shouldn’t be written off just he/she does a particular type of work.
But if anyone can be creative, why aren’t we all coming up with amazing ideas? Both Boden and Weisberg have also argued that one must spend a long period of time developing expertise in a field before one can make a major creative contribution. Perhaps some who find themselves frequently changing jobs may never make a major breakthrough as a result. However, I don’t believe that geographical mobility should be seen as an impediment to creativity. Consider the finding that people who have spent time living abroad tend to perform better at creative thinking tasks (Maddux & Galinsky, 2009).
One barrier to problem solving is functional fixedness (thinking about an object in terms of its typical function, when a solution requires one to think about it in a different way) (Duncker, 1945). It can be difficult to overcome: Jansson and Smith (1991) demonstrated that engineers and engineering students included a bad aspect of a prototype when asked to create a new design, even though they were instructed to avoid this bad aspect. One advantage of moving to a new lab or department is that one’s “fresh pair of eyes” may use a novel approach to a research question or invention that’s under development. Even if new members of staff do not spot an idea by themselves, their relatively naïve questions may inspire the more experienced members of staff to overcome a functional fixation that had previously trapped them.
It is probably uncontroversial to assert that academics have to work hard to bring a fully-fledged creative project online. But does this imply that researching a number of different topics could undermine creative potential?  Not necessarily. Useful insights may often strike due to opportunistic assimilation (c.f. Seifert et al., 1995). This is where one encounters useful concepts that help to further an idea when one is not in the midst of trying to develop the idea. For example, a group of behavioural scientists who undertake to learn more about the organisation of the brain may, during this process of learning, get the inspiration for a new piece of experimental equipment for their animal lab. However, opportunistic assimilation is more likely to occur when a problem has been deeply considered, although not fully resolved. Consequently, the more one has considered an issue, the easier it is for opportunistic assimilation to occur. It seems one simply has to juggle working hard at a major project while staying abreast of other developments.
Many psychologists have already shown opportunistic assimilation by involving themselves in the emergence of multidisciplinary areas (cognitive science and behavioural economics are fecund examples). One example of how psychology can interact with other disciplines is the tension between organisational psychology and economics over how to handle job security (Alsop, 1996). Organisational psychology has found that psychological security can foster innovation (c.f. West, 2000, for a discussion), while many economists encourage a push for increasing labour market flexibility. Alsop suggests that enhancing employability (as opposed to job security) may help to ease this tension somewhat. You may or may not agree with this proposed solution (bearing in mind the above point about frequent job changes). Nonetheless, questions like these have clear social relevance…the upshot is that the dialogue between psychology and other disciplines should help universities to increase their influence.

Left, right, left, right
Some may perceive the drive towards OI in academia (rather than creativity in general) as a ham-fisted attempt to turn university staff into (1) lapdogs for industry, rather than its collaborators and/or (2) administrators that are expected to make their institution run more smoothly instead of pursuing their intellectual ideas. If either of these concerns is true, the creativity of university staff may be stifled.
The first anxiety may turn to panic with the funding for “blue skies” research beginning to feel the pinch under the latest government – with this push coming in a context where people have already suggested that public/private collaborations may not be in the public interest (James, 2002). Where such collaborations go sour, the second anxiety may be vindicated if university researchers find themselves spending their time organising the collaboration instead of staying at the coalface of research. Although there is an argument that innovation only needs to be original for the organisation implementing it (e.g. De Dreu et al., 2011), my own fear is that the label “Innovation” could undermine radical, groundbreaking creativity in research – is there still anything original about universities assisting in clinical trials for pharmaceutical companies?
But let’s not forget the genuine innovations of both university staff and students. Some computer scientists at a university I previously attended (who went on to set up a successful business) grumbled that a sufficient support structure was not there for them to develop patents for technologies emerging from their work. However, there are now many organisations helping graduates to establish spin-off companies based on their ideas. Many universities have innovation centres - ideally, businesses and universities can collaborate here, although again people will fret that more open-ended research (which, ironically, can lead to the most lucrative ideas) could be undermined.
Much of the creativity of psychologists in universities does not translate into obvious OI. Let’s say one puts a newly-developed questionnaire online for free. If many other researchers/clinicians use it, then clearly this is a successful idea, whether or not it is actually making anyone rich or helping one’s own university to top some league table. It should not surprise us that creativity is not always “cashed in”; research (albeit with children) has indicated that more creative ideas are driven by intrinsic motivation (i.e. motivation that comes from within oneself), rather than extrinsic motivation (i.e. motivation that comes from others) (Amabile, 1982). However, recent research with undergraduate students has indicated that while intrinsic motivation should be important for radical creativity, extrinsic motivation drives more incremental, step-by-step creativity (Gilson & Madjar, 2011). Nonetheless, the point stands that the most creative ideas may come about when people are allowed to pursue their passion.

An invitation
Realistically, “hard science” departments will probably continue to dominate in terms of technological innovation. But psychology departments, and certainly their members with an interest in positive psychology, creativity, or problem solving, can play a key role in turning their universities into environments that encourage creativity. At a broad level, here are some of the challenges we can take up:

Clearly, answering some of these questions will be a lot easier if we work with administrative staff and researchers in education and sociology.
Fostering a general potential for creativity in universities may not be as financially rewarding as coming up with the latest industrial advance. However, I hope that all this does not just sound like an appeal to pure altruism; to paraphrase Jack Nicholson in The Departed, your job is most rewarding when you are not a product of your work environment, but rather your work environment is a product of you.

Related posts:
Creativity and two modes of thought
Stress and creativity
Posted by AndrewAllen at 10:23 AM