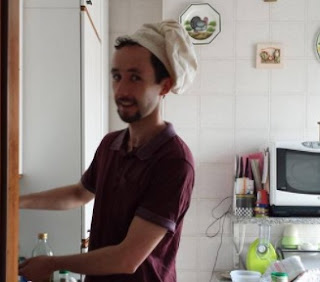 This is my first TV review on this blog, and it might seem odd picking a show about fine dining as opposed to some psychologist's tale. However, as each episode of "Chef's Table" profiles an individual chef in depth, a strong sense of autobiography comes through. Many of the protagonists describe episodes they recall from their lives that have had very clear influences on specific dishes. One chef recalls a frightening incident of nearly drowning as acting as an inspiration for a dish.

Although there is no voiceover, and despite the fact that the show has multiple directors, the sense of editorial voice is strong in this show. The typical episode climaxes with a montage of sweeping, cinematic shots of signature dishes. One suspects that there was a fairly structured set of questions posed to each chef, who lay out how their career (and indeed childhood and adolescence) has played out, leading up to the level of success that has garnered the interest of the program's producers. It is interesting to note the diversity of life experience of the various chefs; I cannot discern any clear "type" in terms of personality. The third series opens with a Buddhist nun who pursued the holy life from an early age, while a later episode concerns a Berlin chef who spent much of his youth fighting in gangs.

Even more strong than the autobiographical slant is the sense of place. The program travels the globe, from San Fran to Peru to Australia to Thailand. At each stop, nearly all the chefs discuss how their cooking acts as an ambassador for the region they come from. Many seem to not only want to source local produce, but to use their dishes to communicate something of their region's character. If novelists sometimes feel misunderstood, I can only imagine what it must be like to attempt to communicate through the medium of a menu. (Having said that, a French chef includes poems about dishes on her menu). Outlets such as "Chef's Table" are no doubt a great forum to chefs who wish to put a message across through their cooking.

Although there may not be a standard personality type amongst these chefs, what they nearly all have in common is a hectic work schedule. The autobiographical approach is not surprising when the lines between work and life outside of work are so blurred. The stresses of the job are quite frequently alluded to, but unlike many more "reality TV" style shows , we are generally spared the spectacle of meltdowns or shouting matches (a la Gordon "it's faaacking RAW!" Ramsay). In a program with a reasonably diverse panel of chefs, it is perhaps also refreshing to note that it is a male chef who alludes most directly to finding a balance between work and family life-an issue that has also been discussed in the field of science and research.

Whether you're into cooking or not, it's difficult not to come away from an episode feeling pumped up about trying to pursue your passion in life. Easier said than done though; perhaps a few more shots of kitchen meltdowns could temper this!

Related posts
But is it creative?
Performance under pressure
Fiction review: "Daniel Martin"


Why not check out the "Psychology in Mind" podcast with me and the talented Gareth Stack: https://garethstack.com/2018/01/30/psychology-in-mind-episode-1/
Posted by AndrewAllen at 1:57 AM