How does the trick work? 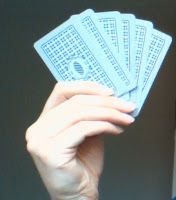 In one of my favourite books of the last decade, Daniel Dennett describes "the tuned deck", based on an account from John Northern Hilliard's 1938 book "Card Magic". This nifty scheme by a certain Ralph Hull confounded professional magicians. Hull would perform one of the simplest tricks in the book. He would ask someone to pick a card from a standard deck of playing cards and place it back in the deck without showing him. Then Hull would produce the correct card that they had picked.

What frustrated his rivals, most of whom could no doubt do this kind of trick in their sleep, is they couldn't work out how he did it. A key aspect of this scheme was that Hull would perform the tuned deck multiple times in front of the same audience, which is generally a no-no for an audience of lay people, let alone other magicians. As far as Hull could make out, no one else ever worked out how to perform the tuned deck.

So how did he do it? The "pick a card, put it back in the deck and I find it" trick is very simple in terms of input and output, but there are multiple mechanisms through which the magician achieves it. The fact that Hull did multiple performances in front of an audience of skeptics was actually key to performing the tuned deck. He would perform the trick one way-(for example, a classic method is glimpsing the card that goes on top of the unseen, chosen card). The other magician would reckon that Hull had used the glimpse, and so when Hull performed the tuned deck again, Hull's rival(s) would act in such a way as to spot or frustrate this method. But this time, they would not be able to catch Hull at glimpsing, because instead of using the glimpse, he would use another method- say, a sleight of hand method for tracking the chosen card by touch. "The tuned deck" was only ever "one" trick in the sense of the input and the outcome, not the mechanism for how it was achieved.

Another example we could take is that of major depression and psychotherapy. This is kind of the psychological equivalent of "pick a card, any card". The input and output are relatively simple - person feels down, goes to talk to a professional, hopefully feels better. But there are various schools of therapy - psychodynamic, cognitive behavioural, narrative therapy etc. Many people have pointed out that there are commonalities to most talking therapies (e.g. articulating what's bothering you to an experienced listener), and so the specifics of the particular talking therapy may not be the key mechanism. Furthermore, even a given school of therapy may have a different means of improving mood within different individuals. Maybe it improves self-esteem, maybe it changes your view of the world around you as being fundamentally dangerous, maybe it helps you to view difficult life circumstances in a more positive light.

I can't help but wonder how often those who seek to explain how therapy works fall for the tuned deck.

Related posts
Depression treatment: biological effects
Review: "Intuition Pumps" by Daniel Dennett
What's it like to be me?