Recent letter to "The Psychologist": Psychology as science/psychology and social justice

A recent letter to The Psychologist magazine has attracted considerable controversy, with editor Dr Jon Sutton adding a note below the letter itself, regarding his decision on whether or not to publish it. The author (Dr Kirsty Miller) outlines the reasoning behind her decision to leave the British Psychological Society. (By the by, I let my own membership of the BPS lapse, but only because I moved back to Ireland rather than as an objection to anything). Although the letter is addressed to this British society specifically, the letter touches on a number of broad and timely/timeless issues within psychology. One value of the BPS in its code of ethics is that psychologists should "stay in their lane" or exercise caution in making knowledge claims, so I should say I'm not an expert on the specifics of much of what's discussed in this response, these are just my thoughts/opinions. I quote from the letter in bold italics below, with my thoughts in plain text. 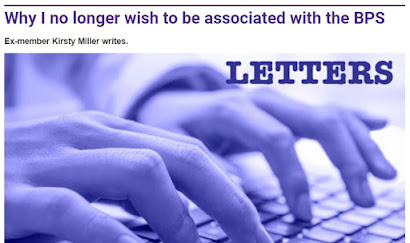 In recent years I’ve become increasingly aware of the politicisation of the British Psychological Society, a shift that I feel is inappropriate for what is ultimately a governing body. When an organisation releases value statements (for example, after the recent BLM furore), it is speaking on behalf of members, and telling us what we should believe. There is no acknowledgement that some members do not subscribe to similar world-views, and it is certainly inconsistent with the BPS’s own statements regarding diversity within the organisation.

Organisations may make statements on behalf of members. Of course, these can't necessarily represent the views of all members (a task like herding cats). In my mind, it would be somewhat prosaic to preface a statement with the caveat that it doesn't align exactly with every individual member's views, or that individual members are free to disagree with some of the world-views expressed. At the same time, this paragraph does implicitly touch on the point that Western psychology does have a tendency towards a more left/liberal worldview that the general population. One survey of 800 psychologists found that only 6% of respondents described themselves as Conservative overall, though there was a certain degree of viewpoint diversity on economic issues and foreign policy.

However, the statement on racial injustice is a poor example to suggest that the BPS has a liberal bias; the underlying message of anti-racism should hardly alienate people across (most of) the political spectrum (I hope). While the statement focuses on racism and anti-racism, the statement more broadly promotes values of inclusion that could be extended to differing political views. However, where such political views themselves become discriminatory, this will frustrate the goal of being inclusive. Furthermore, the BPS can hardly be truly inclusive if it does not at least try to grapple with the fact that different people may find it harder to get into a career in psychology in the first place.

As the cited statement from the BPS with regard to racial injustice and inclusion notes, "The BPS does not exist in a vacuum", and as noted in the about us section of their webpage, the BPS promotes "excellence and ethical practice in the science, education and application of the discipline" (my italics added).

A further issue is it that the majority, if not all, of these statements are promoting a social justice agenda: an ideology that is ill-defined, subjective, and often far removed from reason or evidence. The concepts tend to be based on the notion that the way to address the historical suffering of certain groups is to give them preferential treatment in the here and now. This is presented as ‘justice’, however many would disagree that there is anything just or fair about giving preferential treatment to some and punishing others on the basis of immutable characteristics.

However, one of the biggest problems with the BPS subscribing to social justice principles, is that to do so, one largely has to abandon science and facts. This is a particular issue as the BPS is still trying to claim that psychology is in fact, a science. Furthermore, if we were to behave like scientists (i.e. using evidence to support our beliefs, and self-correcting in the face of conflicting evidence), we should have abandoned many of psychology’s pet outputs (such as microaggressions, implicit bias, inaccuracy of stereotypes, the notion that disparity equals discrimination etc.) a long time ago. However, despite evidence challenging these (and similar) notions, they are still presented uncritically and promoted by members, as well as the organisation as a whole.

I think psychology could be better described as an empirical endeavour rather than just a science. Scientific methods contribute enormously to psychology (e.g. double-blinding, in experiments as well as in peer review, although double-blinding can be difficult to practice in studying talking therapy compared to an active pill versus placebo). At the same time, qualitative research methods used in psychology, while empirical, do not necessarily employ the scientific method, and qualitative researchers have generally pointed to the importance of reflexivity (i.e. acknowledging the role of researchers' subjective appraisal in their empirical work). I think that reflexivity is important across the board in psychological work, not just in employing qualitative methods.

With regard to dropping ideas with weak empirical support, it is true that, once an idea takes hold, it can indeed be "sticky" in terms of self-correcting if emerging evidence suggests that it was on weak foundations to begin with. However, as Dr Miller points out, research has been done that challenges any perceived social justice "consensus", and besides the research cited here, I would also add that a lot of implicit bias training has come in for some stinging criticism from people with rather diverse political viewpoints.

Nonetheless, this does touch on an important point. Although psychological research may inform political debates, if political/ethical statements are presented as if they were scientific facts, this can have the negative effect of undermining public trust in science if such value statements are later found to be based on weak evidence. Conversely, do we really need an evidence base to say "racism is bad"? The idea that society needs a better evidence base for racism being a social ill could lead to inertia in addressing racism.

Finally, and perhaps most concerningly, following a social justice agenda prevents us from achieving the goals that as psychologists, we should be striving towards. First, it actually promotes mental illness – encouraging individuals to look for, and hold on to slights, read in to others’ intentions, and assume the worst from others’ behaviour (all patterns of thinking that CBT practitioners warn against).

Having dismissed social justice as ill-defined, Dr Miller nonetheless opines that it is corrosive to the aims of psychology. This point here appears to make a mistake that is mentioned in an article that she cites earlier in her letter (i.e. conflating social justice with victimhood culture). A lot of thinking that I'm hearing within social justice tends to downplay inter-individual interaction compared to broader systemic issues, and so shouldn't necessarily lead individuals to ruminate on the possible intentions behind another individual's behaviour or obsess over perceived slights. In contrast, there are various mechanisms through which pursuing social justice could be beneficial to mental health. Getting involved in a political organisation that challenges racism, for example, may help someone to overcome feelings of helplessness or alienation (although this research does suggest caution about assuming this will necessarily be the case for everyone).

Second, it prevents education, with professors (particularly those who are categorised as white and/or male) being increasingly unable to respond to, contradict, or ultimately educate those from other demographic groups.

The article cited here seems an odd choice, referring to an incident on Twitter rather than a classroom (although a number of professors were involved). A lot has been written on this topic, we could talk about anecdotes about someone being fired over a faux pas, but it's beyond the scope of the letter (or this post) to deal with it in depth. It is wrong if academics in psychology (or any other subject area) are disciplined simply on an ad hominem basis. White and/or male and/or cishet etc. etc. professors may feel more defensive in the lecture hall. Applicants who wish to undertake a doctoral in clinical psychology may feel up against it given that they're from an ethnic minority. Nonetheless, I don't think we should be too pessimistic about the possibility of being anti-racist, anti-sexist etc. while still being able to run courses in psychology. As I mentioned in my post on academic freedom, politics and economics it is possible to have academic freedom without having to put up with prejudice towards students/staff.

Finally, the teachings create damaging divisions between groups. As a student, I began a ‘minorities and majorities class’ treating all human beings equally regardless of their demographics, and left it feeling obliged to avoid all interactions with minority groups lest I offend someone – one of the many known problems associated with such programs.

The paper cited mentions potential pitfalls with cultural awareness training (and, implicitly, cross-cultural encounters). These include placing cultural difference at the centre of interactions, and the associated issue of creating/heightening a sense of in-/out-group. Addressing these pitfalls shouldn't necessarily be contrary to efforts at social justice (for example, acknowledging a person's individuality would avoid placing culture at the very centre of the interaction, and could correct the social injustice of seeing members of a given group as "all the same"). The fact that teachings require reform doesn't refute the value of having cross-cultural awareness.

Should the BPS re-evaluate their values and decide to do their job of governing the organisation from an impartial and scientific standpoint, I would gladly pay my membership fees and re-join. Until then, I fear I shall continue to watch the downfall of our discipline – one that is due in large part to the complicity of those who were tasked with protecting it.

The BPS could go in the direction of being more exclusively science-focused, commenting less on the ethical and the political. If it were to do so, no doubt it would gain some members and lose others. However, I think it's alarmist to suggest that the discipline of psychology will suffer some "downfall" as a result of engaging on political or ethical issues (which it has been doing for quite some time).

The letter as a whole has a sense of having one's cake and eating it, calling for greater objectivity/harder science/evidence-based practice while also making some broad assertions that call for more evidence, such as the idea that a social justice agenda promotes mental illness. This may be coming from a place of wishing to offer a corrective for a left/liberal tendency within psychology, but ultimately the letter vacillates in playing by its own rules. Ultimately, although politics and values will be more/less salient in different sub-disciplines, human psychology isn't really separable from the political or ethical, and I think the BPS overall is "within its lane" in supporting research while also being cognisant of the broader sociocultural context (including the historical context) in which this is happening, and, who knows, maybe even applying psychology to help create a fairer society for the benefit of people's mental health. What's so bad about that?

Posted by AndrewAllen at 1:12 AM