In defence of sometimes being in the moment 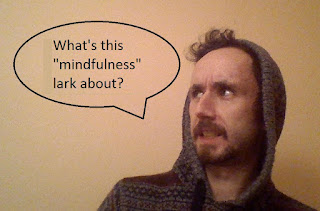 As you may be aware, I have an interest in mindfulness. I both practice mindfulness and research its effects in the context of chronic stress.

A rather disgruntled piece from a couple of months back in the Sunday Review of the New York Times has been getting some ongoing attention on social media. My response to it is a bit delayed, but if you are interested, here is a link to the original article (which I quote at some length in italics in this post):

I’m making a failed attempt at “mindful dishwashing,” the subject of a how-to article an acquaintance recently shared on Facebook. According to the practice’s thought leaders, in order to maximize our happiness, we should refuse to succumb to domestic autopilot and instead be fully “in” the present moment, engaging completely with every clump of oatmeal and decomposing particle of scrambled egg. Mindfulness is supposed to be a defense against the pressures of modern life, but it’s starting to feel suspiciously like it’s actually adding to them.

I'd probably be flattering myself if I called myself a "thought leader", but I can say that mindfulness is intended to be a non-judgemental awareness of the present moment. The "decomposing particle of scrambled egg" probably ain't aesthetically pleasing to the author, but I guess mindfulness is more about trying to get away from the judgment calls we naturally make. Easier said than done, but mindfulness is a practice, not something one is supposed to get overnight.

The point about mindfulness adding to our pressures is interesting though; I think a point that is implicit here is feelings about our own feelings. If one doesn't start to feel an effect from a practice like mindfulness after a few weeks, there is of course the risk that we might start to think that we are particularly resistant to psychological self-improvement. Some people take longer than others to "get into" mindfulness (and some will naturally give up on the practice over time). This is something a skilled mindfulness instructor should be able to pick up with clients. In any case, good mindfulness materials will be at some pains to reassure novices that they should not beat themselves up if their minds (naturally) start to wander as they engage in meditation (I know my own mind still wanders quite a lot mid-meditation after a few years of practice).

Perhaps the single philosophical consensus of our time is that the key to contentment lies in living fully mentally in the present. The idea that we should be constantly policing our thoughts away from the past, the future, the imagination or the abstract and back to whatever is happening right now has gained traction with spiritual leaders and investment bankers, armchair philosophers and government bureaucrats and human resources departments....

Surely one of the most magnificent feats of the human brain is its ability to hold past, present, future and their imagined alternatives in constant parallel, to offset the tedium of washing dishes with the chance to be simultaneously mentally in Bangkok, or in Don Draper’s bed....What differentiates humans from animals is exactly this ability to step mentally outside of whatever is happening to us right now, and to assign it context and significance. Our happiness does not come so much from our experiences themselves, but from the stories we tell ourselves that make them matter.

Whether or not one is an "armchair philosopher" (capable of identifying "perhaps the single philosophical consensus of our time"), one can indeed take great pleasure from mentally projecting oneself into the past or future (whether or not it is a realistic version of said past or future). However, to use this point to "refute" the way most people use mindfulness meditation is nothing more than the slaying of a straw man. Taking a moment at the end of the day to simply focus on your own breath, your own posture etc. is useful for people who would otherwise be prone to thinking about their anxieties about the future and/or their resentments about the past.

But still, the advice to be more mindful often contains a hefty scoop of moralizing smugness, a kind of “moment-shaming” for the distractible, like a stern teacher scolding us for failing to concentrate in class....This judgmental tone is part of a long history of self-help-based cultural thought policing. At its worst, the positive-thinking movement deftly rebranded actual problems as “problematic thoughts.”...This is a kind of neo-liberalism of the emotions, in which happiness is seen not as a response to our circumstances but as a result of our own individual mental effort, a reward for the deserving. The problem is not your sky-high rent or meager paycheck, your cheating spouse or unfair boss or teetering pile of dirty dishes. The problem is you.

It is, of course, easier and cheaper to blame the individual for thinking the wrong thoughts than it is to tackle the thorny causes of his unhappiness. So we give inner-city schoolchildren mindfulness classes rather than engage with education inequality, and instruct exhausted office workers in mindful breathing rather than giving them paid vacation or better health care benefits.

Truly nothing makes me #triggered like the implication of neoliberalism being thrown at psychology. Never mind that I help to run free mindfulness classes for caregivers. (Okay, okay, I'm taking a broader social point too personally). Of course, if individual therapeutic approaches are treated as if they are going to solve all of society's ills then these ills will remain. We should be vigilant to the very real threat of psychological therapies being seen as a cure-all in this way. But I'm also reminded of Christopher Hitchens's sarcastic remark along the lines of "Oh well, we can't do everything, so let's do nothing". Even in fairer societies people will face challenges, and if a way thinking can help them to build resilience then this is a good thing.

In reality, despite many grand claims, the scientific evidence in favor of the Moment’s being the key to contentment is surprisingly weak. When the United States Agency for Healthcare Research and Quality conducted an enormous meta-analysis of over 18,000 separate studies on meditation and mindfulness techniques, the results were underwhelming at best.

Although some of the studies did show that mindfulness meditation or other similar exercises might bring some small benefits to people in comparison with doing nothing, when they are compared with pretty much any general relaxation technique at all, including exercise, muscle relaxation, “listening to spiritual audiotapes” or indeed any control condition that gives equal time and attention to the person, they perform no better, and in many cases, worse.

The meta-analysis Whippman discusses should certainly give pause to anyone who thinks that mindfulness is everyone's "key to contentment". However, the 18,000 studies she mentions are simply the titles that were screened in the systematic review-the conclusions of the article are actually based on evidence from 47 studies. This is still a lot of evidence, but although many studies focused on people with anxiety problems, the evidence came from people with really quite diverse clinical problems (the analysis did not include studies looking at mindfulness in healthy populations). It should also be noted that it is generally quite difficult to show effects that are greater than an active control. In particular, exercise has a strong antidepressant effect, so to suggest for example that mindfulness is "no better than" exercise is weak criticism. Nonetheless, it should be borne in mind that the observed beneficial effects of mindfulness on anxiety and depression were mild-moderate.

I think another point being lost in this quick overview is the strong individual variability in response to mindfulness. As with many other therapeutic approaches, a lot of people benefit but a few will experience negative effects; it should be noted that mindfulness comes with risks (it may be that people prone to panic attacks in particular should exercise caution). More common than an actively unpleasant reaction is the feeling that "mindfulness simply isn't of interest for me". This decision that it "doesn't float my boat" may happen after a few sessions (I suspect Whippman falls within this group) or oftentimes the minute someone hears a brief description of what mindfulness is. And if mindfulness doesn't make someone tick, and other activities do, then good for them.

But perhaps the conclusion I'm most concerned that people will draw from this article is not that mindfulness will have no major effect overall in randomised controlled trials compared to a strong active control (which could happen due to strong individual differences in response), but rather that mindfulness does nothing at all-that it is a kind of homeopathy of the mind, when it fact it can have quite profound effects on the way people think, often for good, but sometimes in more ambivalent or even negative ways as well.

In any case, if the dishes are a pain in the neck, feel free to mentally travel wherever your imagination may take you. And if that is where your mind is at present, try to experience the fun as fully as you can!


Related posts:
Mindfulness and the mind
The breadth and depth of research impact
Posted by AndrewAllen at 1:10 PM