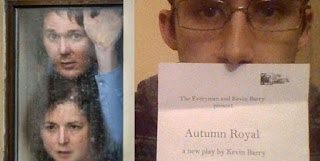 We are seated on the stage of the Everyman Theatre, Cork, in just two rows of chairs. Stacks of washing machines form the walls behind them, and the kitchen floor almost impinges on the audience's seats. Although this is a close-up view, when the performances begin, they remain more theatrical than cinematic. While always remaining in character, Siobhán McSweeney and Shane Casey play to the crowd in a manner that is more like unaffected stand-up comedy than self-conscious breaking of the fourth wall.

They play Timothy and May, a brother and sister from Cork who are caring for their ill father. Tim is 36; May is somewhat older. The soundtrack chimes with the ticking of a clock. May and Timothy are aware that they are not getting younger, and they point out that their father could live for years or maybe decades. Banana and peanut butter sandwiches are made at intervals throughout the play, a repetitive task. Days are too slow; years too fast. Boredom is fought with gossip about locals.

One wonders how well references to specific places around Cork city and county will travel, but it wouldn't be true to the characters for them to purely to speak in universal terms that transcend place; Timothy and May are stuck in this particular place. Timothy for example might have more perspective if he could fulfil his pipe dream of travelling to Australia, but for now the siblings are where they are. May is concerned with how the neighbours will respond to them placing their father in a nursing home. The street hems them in as much as the house.

Although much of the comedy is broad, there is a darker tone throughout. As the characters' fantasies stray towards the homicidal, I can't help but imagine an epilogue where an older actor represents the elderly father, challenging the audience on the extent to which they identify with May and Timothy. But like Daphne Du Maurier's Rebecca, we only see the father through the eyes of others (though he is heard clamouring from upstairs). Maybe this isn't one to see with your folks.

Autumn Royal will be playing next at the Project Arts Centre in Dublin 7-11th Feb and at The Dock Leitrim 23rd February. (Both shows are sold out as far as I'm aware)

Related posts
He ain't heavy, he's my carer
Thoughts on compassion fatigue
Posted by AndrewAllen at 11:16 AM