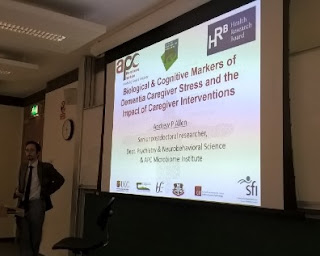 Thanks to generous funding from the Health Research Board, we at UCC Dept. Psychiatry & Neurobehavioural Science and the APC Microbiome Institute were able to host an international research seminar. This was a chance for some leading researchers in the areas of caregiving stress to discuss their research and ideas.

Shireen Sindi of the Karolinska Institute in Sweden set the scene for our discussion of stress. She touched on classic work from the late sixties by Mason, highlighting key factors for producing a stress response, such as a stressor's unpredictability, its unfamiliarity and a person’s sense of control (or lack thereof). This work has since been borne out in a large review by Dickerson & Kemeny, who found that release of cortisol tended to be most clearly associated with such aspects of stress.

Dr Sindi made the interesting point that people may often lack insight into their own chronic stress levels, particularly in the case of physiological stress. This raises the question of whether self-report and physiological measures may show less concordance when tapping into more long-term stress. Speaking of long-term stress, she pointed out evidence that chronic stress in childhood may lead to very difficult-to-reverse changes in the amygdala (a region of the brain associated with processing emotion such as fear).

Brent Mausbach from the University of California at San Diego opened by highlighting a classic finding from Schulz and colleagues, indicating that caregivers were at increased risk for mortality at follow-up, specifically those with high levels of caregiver strain. He then discussed some of his own findings, looking at caregivers and whether they had depression and/or distress with challenging behaviours in the patient, with cardiovascular disease (CVD) as the outcome. Those who suffered from both depression and high distress in their caring role had an increased risk for CVD-a rather startling result.

Professor Mausbach went on to discuss some really interesting results from his group following caregivers over time in terms of measures of inflammation and clotting; interleukin-6 and D-dimer were higher in dementia caregivers compared to controls, and also increased at a sharper rate. These biological markers are associated with heightened risk of CVD, so these findings neatly suggest a biological mechanism as to how psychosocial stress can lead to negative health effects over time.

It wasn’t all bad news; he also highlighted promising preliminary data on treatment. The team at San Diego used behavioural activation (getting people to engage more in activities they enjoyed) as a way to treat depression in caregivers, thereby treating CVD risk. This behavioural activation approach, which allowed carers to develop their own tailored intervention, led to greater improvement than a typical intervention (education and support).

Kathryn Lord brought things back to basics, challenging assumptions underlying work in the area of caregiver stress, particularly the concept of “challenging behaviour”. Lord suggested that the classification of a given behaviour as challenging risks ignoring the perspective of the patient, who may act as they have genuine grievances with how they are being cared for. Dr Lord posited that a person-centred approach to care should inquire into the meaning of a patient’s behaviour, and whether they are trying to communicate something about their environment.

Dr Lord also warned of being too ready to attribute any behaviour that causes others difficulty to dementia. Patients with dementia can have pre-existing issues with others that can pre-date the dementia that can nonetheless be missed by care workers (or indeed family caregivers).

Like Brent Mausbach, Dr Lord had some very nice intervention data from a randomised clinical trial for family carers using the START program. This program was developed by the Livingston team at UCL in the US, and Dr Lord’s team adapted this program for a UK population. Although it only lasted 8 weeks, START reduced the risk of depression at follow-up years later in the carers who completed it. It was also cost-effective; interestingly carer’s health costs actually went up in START group (perhaps due to increased health-seeking behaviour), but the patients’ health costs went down by more than the increase seen in the carers.

Noted intellectual-about-town Andrew P. Allen wrapped things up, highlighting similar themes in his own research that chimed with previous speakers, including immune data suggesting increased inflammatory cytokines in carers compared to controls, as well as a positive impact of psychosocial interventions for carers (with cognitive performance as the outcome). He also tied this area in with the brain-gut axis, mentioning evidence of altered microbiota in major depression, evidence from France of increased prevalence of IBS in carers as well as the potential for probiotic supplementation to attenuate stress.

Posted by AndrewAllen at 3:40 AM