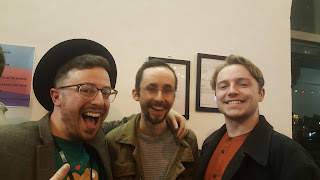 Enter Perry Pardo. Successful entrepreneur; envied, rich, a go-getter. He had to work his way to top to become the man he is today, and if you're not willing to come with him, then fine, stay part of the 99.9%. Think of Tom Cruise's character in Magnolia, but instead of women, his conquest (or perhaps his enemy) is everyone else.

Mic Drop, a new play from Gareth Stack, comprises a motivational talk by Perry Pardo, who must contend with indifferent AV staff, an audience that can never be as engaged as he wants, and his own demons to deliver his message of crawling your way to the top by any means necessary. But for all his go-out-there-and-get bravado, Perry is well aware that Ireland, and the world, are not meritocracies.

The script is finger-licking for any actor, and in the words of Pardo, Tyrell takes it and eats it with his f(ck)ng mouth. It's perhaps the most intense one-man performance I've seen since Jonathan Capdevielle's role as a serial killer (and his victims) in Gisele Vienne's production of Dennis Cooper's Jerk. Tyrell struts and frets his half hour on the stage like his life depends on it (no doubt Pardo believes that it does). Modafinilled out of his box, Pardo is itching for confrontation but has to content himself with feeding off the nervous quiet of the audience.

Mic Drop has its final performance tonight as part of the Smock Alley Scene and Heard festival. It is a 30 minute, abridged version of a longer play, but manages to pack more into those 30 minutes than most do in 90.  The unabridged version will be worth looking out for.