I felt a funeral, in my brain

In our discourse on depression, one sometimes sees an attitude that people need to snap out of it, sometimes even that depression doesn't exist. Without wanting to pander to the view that mental disorder is just the fictitious cousin of physical illness, we can counter the non-existence argument by simply pointing out how depression has pervasive effects on the body.

A biological marker of biomarker can be decribed as a "an indicator of a physiological or pathological state that can be objectively measured and evaluated" (Spiller, 2011). A biomarker may reach the status of surrogate endpoint if it can be used as a substitute for more direct clinical outcomes (e.g. reduced quality of life or worsened apathy in depression). We're probably a long way off identifying a surrogate endpoint for depression. Depression is still identified using the person's self-report, although for various reasons people may deny or minimise their experience of depression if questioned about it. Nonetheless, a number of physiological variables do seem to be affected by major depression.

Brain derived neurotrophic factor is one example. It is a protein that is associated with the development of neurons, and with learning and memory. There is increasing evidence that BDNF levels in the blood are lowered in depression, and successful antidepressant treatment can restore BDNF levels. Not only is circulating BDNF reduced, but there is post mortem evidence from suicide victims that BDNF is indeed reduced in the central nervous system (although this finding did not appear to be specific to depression). Not surprising then that there's evidence that depression can have a negative effect on cognition, with worse severity of depression being associated with worse episodic memory and executive function.

So it seems depression is bad for the brain, but it is also bad for the rest of the body. Major depression can also have an impact on the immune system. It can increase inflammatory cytokines-these moderate the immune system by increasing its defences. This is useful for fighting infection, but may not be so hot if it is occurring chronically in the absence of infection. Furthermore, these cytokines can also moderate neurochemical signalling in the central nervous system, potentially exacerbating the depressive state. The immune system may be involved in the development of depression-chronic stress is associated with the development of depression, and stress can activate the types of immune system activity involved in depression.


But one shouldn't make the scenario seem simpler than it is. Part of the difficulty in identifying biomarkers if that, of course, depression hits differently for different people. Although every person's experience is unique, there are some consistencies in diversity. Melancholic depression is associated with anhedonia (a lack of enjoyment or positive response to things that used to cheer one up), early waking time, feeling worse in the morning, weight loss and agitation. There is evidence that the hypothalamic-pituitary-adrenal axis (HPA axis) is more highly activated in people suffering from melancholic depression, compared to those with non-melancholic depression. In the HPA axis, the hypothalamus (a region of the brain) initiates a chain reaction of neurochemical processes, resulting in the release of cortisol from the adrenal gland. Cortisol is a hormone released in response to stress, helping to mobilise the body for the so-called "fight or flight" response. It can permeate to tissues throughout the body, so whatever affects cortisol release can have pervasive effects on our physiology, including the immune system.

So, different sub-types of depression can guide the study of its biological effects. In the future, it may be the case that the search for biological changes in major depression will lead to depression being broken down into further sub-categories. If these categories don't line up with some aspect of the depressive experience, they will have to be evaluated against some other yardstick, such as predicting effectiveness of treatment for depression. Genetic and neurological technologies are developing all the time-perhaps the data sometimes comes in too fast for researchers to analyse and understand in its full depth. For the foreseeable future we will probably still be relying on the person's experience to identify depression and what goes with it. It's important as individuals and communities that we encourage people to seek help if they need it.

If you are or think you may be suffering from depression, whether or not you are suicidal, please do seek help. You could speak to family/friends, to a counsellor/your GP, or get in touch with the Samaritans by phone at 116123 (Republic of Ireland) or by email at jo@samaritans.org.
Posted by AndrewAllen at 2:59 PM No comments: 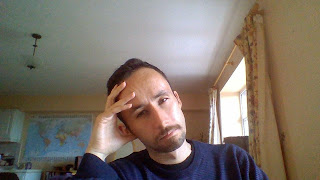