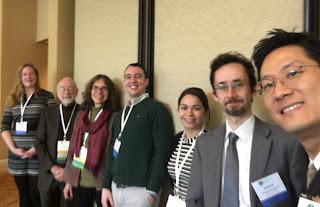 The Young Investigator Colloquium is a satellite event for the American Psychosomatic Society Meeting. The aim is to bring 25 young investigators together with 10 senior researchers to receive mentorship about their research ideas. As a participant at this year’s colloquium, I am a member of the Engel group, with Susan Lutgendorf and Redford Williams as mentors.

Young investigators present their research ideas for 5 minutes. This is followed by 15 minutes of feedback from mentors and then 10 minutes of feedback from the other young investigators. This pretty much inverts the usual ratio of presentation:feedback within a talk. It's a nice way to take the focus of rehearsing your speech about what you know already and bring the focus to getting more perspectives on how your work could be different.

One point that was brought up across the board was the potential to incorporate genetics into our work. In the research I work on, we already have plans to look at the genetics of the microbiota, although perhaps the human genome is something I have dragged my heels about learning about. Another suggestion was to make better use of models in writing grant proposals (you can’t go too wrong with more boxes with arrows). I suppose it does no harm to get a review written before asking for money for research, so you can include your article’s figure as well for a cheeky self-citation. The peer review was also mutually beneficial-we discussed topics such as trade-offs between using double-blind design and completing a trial quickly if placebos take a long time to produce, employing mixed methods with qualitative methods and chasing different sources of funding.

When many conferences are talk-poster-talk-sponsor table-talk, it is forward-thinking to have a more active learning activity like this, not to mention generous of mentors to give up half a day for the event. I don’t think my project will undergo a sea change as a result of the Colloquium. However, I don't this was really the aim; one of the objectives was to improve the writing of our research proposals, as well as critiquing the research ideas themselves. It does seem a pity that close collaborations between people in our group didn’t seem to suggest themselves by the end of the half day, but then there was a diversity in our research topics as well as underlying similarities. Later in the conference we were treated to lunch with the mentors. It was a good chance for the organisers to plug next year's meeting. Given that it will be at the closer venue of Seville Spain, and as Colloquium participants get free registration for the following year, I'm inclined towards attending.

Posted by AndrewAllen at 3:52 AM No comments: 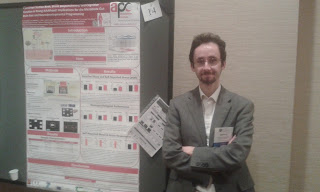 Weclome to downtown Denver, where the buildings are tall and the wide roads full of clean young cars and pick-up trucks. It's the American Psychosomatic Society meeting 2016, and I had a tube of three posters to present, all of which can be downloaded in full from the UCC psychiatry website. Despite the relatively late timing of the poster session it had a very lively atmosphere.

Dean Ornish gave a great talk on how common-sense behavioural intervention (comprising diet, exercise, stress reduction and social support) can not only be a part of preventative medicine but also have startling value in treating various chronic health conditions, including cancer as well as heart disease.

His talk was followed by Lisa March, who highlighted how mobile technology can be used to implement the kinds of program that Dean Ornish had just been discussing. I liked her term of "minimally disruptive healthcare", capturing the idea of how the process of receiving treatment may be burdensome for some patients.

A symposium on mindfulness generated some interesting topics-Eric Garland highlighted how mindfulness is often defined more in terms of what it is not (e.g. non-judgmental) than what it is, although he suggested that positive re-framing (quite CBT-ish) could be what it is about, as well as savouring (so perhaps increasing positive feelings is as important as reducing stress). Jeffrey Gresson and Linda Carlson also gave interesting talks on mindfulness for stress reduction and psychological recovery from cancer. In both their talks the concept of spirituality was brought up. The spirituality measures they used seemed to differ quite a bit, although frankly I think this is symptomatic of the incoherence of spirituality as a concept.

Speaking of mindfulness, the meeting also had regular well-being classes, including mindfulness and tai chi (I must confess I didn't attend these, given a mix of familiarity with many of the topics plus schedule clashes). It's great that the conference can have these types of events as part of the program, in addition to the awesome Young Investigator Colloquium (covered in depth in an upcoming post).

Saturday morning saw prize presentations from three major researchers. Following a hagiography of an introduction from one of his mentees, brain-gut axis demigod Emeran Mayer took to the stage. He presented some well-known work from the last couple of years on probiotics and fMRI, as well as broader characterisation of the microbiota. Some newer stuff highlighted his more recent work with Jennifer Labus using mathematical models to link a variety of variables at the levels of psychological report, neuroimaging and microbiota across multiple pathways (it looks a bit like structural equation modelling, although as he didn’t have scope to get into great depth; there may be more to it than that). Even if it is just SEM it’s probably an underused method for mapping the complexity of brain-gut interactions.

George Slavich discussed STRAIN, a stress questionnaire that takes about 20 minutes to fill in, thereby giving more detailed information than something like a 10-item scale, but more do-able than some of the deeply in-depth life stress interviews which can take hours to analyse. Professor Liz Brondolo highlighted her work on racial discrimination and its negative psychological impact, with a particular focus on how it may moderate the clinician/client relationship. She employed an intuitive case-study type structure to make some of the issues she highlighted more concrete (e.g. physical fatigue enhancing fatalism around health, social cognition around subtle conversational cues leading to better/worse communication between clinician and client).

I had a little time for some tourist stuff as well, including sampling some local brews, as well as a pre-conference visit to the natural beauty of Red Rocks. All in all a good time! (Credit to significant other Daniela Scevaroli for the picture below). 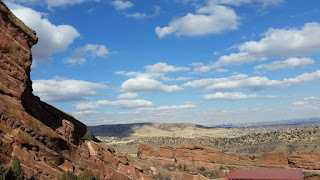 Posted by AndrewAllen at 7:31 AM No comments: