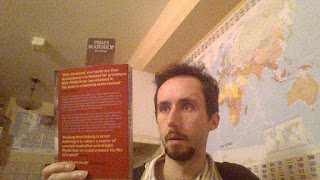 "Where do we go from here?
The words are coming out all weird
Where are you now when I need you
Alone on an airplaneFalling asleep against the window painMy blood will thickenI need to wash myself againTo hide all the dirt and pain'Cause I'd be scared that there's nothing underneathAnd who are my real friendsHave they all got the bendsAm I really sinking, this slow"

The Radiohead lyrics came to my mind in the wake of my heart-pounding anger in the wake of the appalling recent attacks in Cologne. Of course, although few perpetrators have at present been identified or apprehended, these attacks have in turn stoked increased rejection of "multiculturalism" (a deliberate shorthand for Muslim immigrants in Europe which is a handy tool for some to drive increased political resistance towards most migration). With his new novel imagining a near future where Sharia law becomes a dominant political force in France (just slightly ahead of the National Front), Michel Houllebecq is pushing himself into the centre of the controversy. However, Islam had already come under fire in his previous novel "Platform"-the tale of a civil servant who embarks on a trip of sex tourism shortly after his father is murdered by a young Muslim male. We later encounter characters who rant about the religion, and the novel culminates in a terrorist attack. Houllebecq doesn't help himself when much of the villiany in his novels isn't ostensibly religiously motivated.

Secondary to Houllebecq's beef with Islam, there appears to be a vendetta against feminism (or at least certain feminists). In his late 90's novel "Atomised" one character opined that the problem with most feminists is that they married awful men. In "Platform", one female character is particularly "shrill" on the topic of sex workers, denouncing any participation in sex work as slavery. I'm not sure if "straw feminists" is the right term, as you can find women who hold such views if you want to, although they are hardly representative of a group as diverse as feminists, many of whom hold more nuanced views on sex workers. Of course, I may just be reading too much of the author's views into his characters (it doesn't help when Houllebecq's protagonists generally share his first name), but it seems a bit meh: disses an outgroup for being against women and then disses feminists; so far, so passé.


But as you keep reading, more and more comes under fire from his withering gaze. One part of the previously-mentioned "Atomised" that made me want to throw the book across the room was a character's description of an orgasm as being one of the most fulfilling moments of his life. There seemed to be the implication that there was little more to his life than trying to pursue sexual pleasure. Again, in "Platform", the protagonist seems to be in the unenviable condition of a general anhedonia that appears only to be alleviated by sexual intercourse, which is detailed in some quasi-pornographic detail throughout the novel.

Perhaps the real target of Houllebecq's prose is neither Islam, Muslims, feminism or women, but rather a broader malaise within the world at large. The malaise here is as much economical and political as it is sexual or religious-the failure of socialism in the face of human nature, the greater profitability of purely financial work compared to productive work in the real economy, the pervasiveness of violent crime, a post-colonialism so ingrained that people seem quite happy with exploitation (be that via sex work or just plain overwork), even if they are the ones being exploited. Houellebecq has a rare knack for describing complacency and sloth in a manner that is matter-of-fact on the surface, but betrays an underlying anger.

I don't share the lack of purpose or enjoyment of life that Houellebecq portrays. But for all the emptiness of the "Platform's" protagonist, Houellebecq lets us peer into the many of the sordid sides of our world, a fly's eyes view that few individuals will be able to take in within the space of a lifetime.

Related posts:
Sexism in the academy
Review: "A Girl is a Half-Formed Thing"
Posted by AndrewAllen at 12:29 PM No comments:

Just what is bullshit? (And how meaningful is "profound"?) 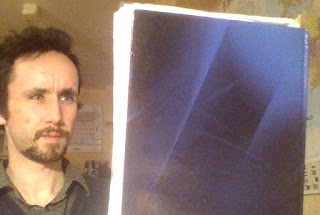 A recent paper with the delightful title On the reception and detection of pseudo-profound bullshit  has been receiving some attention in the media recently, in places such as the Huffington Post and Vox. (I just realised that this paper is from the same team as another paper on dual processes I mention in my 2015 round-up). It's understandable that this research is getting attention when, as the authors point out, there has been a lack of empirical psychological research looking at pseudo-profound bullshit (BS from hereon).

The authors indicate that BS is not the same as lying (e.g. "I did not have sexual relations with that woman") which is where one says something one knows to be untrue. Nor is it the same as nonsense, which has no syntactic structure (e.g. "dog cat runs from on at"). Rather, BS is a structured statement made without regard for whether or not it is true, and which appears to convey something meaningful, while not conveying "adequate" meaning (I have added the scare quotes myself; the authors give the example "hidden meaning transforms unparalleled abstract beauty"). (I think there is some overlap here between the definition of BS and what Dan Dennett calls "deepities" in his book "Intuition Pumps").

I can imagine a lot of people will debate about the correlations found in the paper between BS detection and other traits (e.g. verbal intelligence, religiosity). We can argue about such associations until the abstract explodes in puddles of new heightening, but I'd rather focus on how the authors operationalised BS. They firstly inserted randomly selected buzzwords into sentences with syntactic structure and asked participants to rate their profundity (with profound defined as “of deep meaning; of great and broadly inclusive significance.”) They also used some real-world examples of BS by taking some statements from Deepak Chopra that they felt to be particularly good examples of BS (they hastened to add that they did not feel all Chopra's stuff is BS).

Here's my main problem: as the authors mention in their discussion: "the vagueness of the statements may imply that the intended meaning is so important or profound that it cannot be stated plainly (Sperber, 2010)". Although they only mention this briefly, I do think this is a real problem here. I think some of the statements they give could quite easily convey a deep meaning to at least some people. "Hidden meaning transforms unparalleled abstract beauty" is an example given right on the first page. The words are chosen are random. But hang on; might the hidden meaning of a great abstract masterpiece, upon the viewer discovering this hidden meaning, not lead to a transformation of the work's unparalleled abstract beauty? Is that really such a difficult or unusual interpretation to take from such a statement?

Perhaps, after rating the profundity of a statement, it would be good to have participants describe what they think the statement means (or means to them) in more concise/precise terms. As the authors quote “All too often, what readers do is judge profound what they have failed to grasp” (Sperber, 2010, p. 583). It may be the case that most people cannot actually offer a meaningful interpretation of a statement, even after saying they think it's profound, but perhaps some can give a clear account of the meaning that they take from the statement?

Further, it may be interesting to probe what type of statement people believe themselves to be looking at-if someone thinks they're reading analytical philosophy they should be setting a higher standard for clarity than if they think they're reading poetry. I would suspect that when people are presented with one of the BS statements used in this research, they are more inclined to believe they are reading something this was always intended to be open to interpretation, and which different people could take different things from.

Imagine that an artist says, "it's not important what I think about my work, what matters is what you think about it". (Plenty have said things like this). Might that not fit with this definition of pseudo-profound BS? And if so, would our culture not be poorer if we all ignored all such work? (Off the top of my head you can kiss Joyce's Ulysses and Nirvana's Nevermind goodbye...)

Related posts:
A review of "Intuition Pumps"
Who's studying who? Demand characteristics

Posted by AndrewAllen at 2:46 PM No comments: