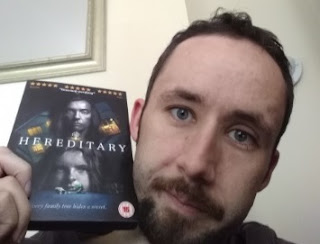 "Hereditary" is the debut feature film of Ari Aster, who more recently has released "Midsommar", and previously directed a number of short films, including "The Strange Thing about the Johnsons". Although Aster's work in general tends towards the scary, "Hereditary" is his film most firmly placed within the horror genre, though at its heart it is a family tragedy. Ellen, the late matriarch of the family, doesn't have a speaking role in the film. Nonetheless, her death is a catalyst for the story, or rather it is at a surface level, as the events that unfold appear to have already been part of Ellen's more long-term machinations.

Grief is a clear theme of this film, but guilt is also dealt with in some depth. In the aftermath of death, Annie (played by Toni Colette) argues not only about to whom blame should be given, but also about the depiction of the death in her own work as an artist. When her husband confronts her about how her son will react to it, she asserts that her work is a neutral or objective view of the incident. From the outside looking in, the work does appear to be reasonably objective, but of course no family member can approach such personal work without baggage. The apparent absence of guilt on Ellen's part (a note from Ellen cryptically promises "our rewards will be great") thus contrasts with her daughter's nuclear family, where guilt is deeply felt and passed from one person to the next.

Psychological disorder has been alluded to in many scary films over the years, with a differing level of flippancy, sympathy or exploitation. Annie's psychiatrist husband assumes that her fears of a supernatural evil are just manifestations of a disturbed mind, although Annie's view is ultimately vindicated. Perhaps more interesting is how Annie refers to a history of schizophrenia and psychotic depression in her family during a group therapy session. The idea of inheriting psychological disorder is always in the background, as discussed in some depth elsewhere, but given the supernatural element later in the film the viewer is left to wonder if mental disorder (at least in this family) is reified as a curse. Or perhaps paranoia and self-destruction are being framed as rational coping strategies in the face of some terrible, transcendent evil.

The film indulges in a few horror tropes while also adding some striking and original imagery. Towards the climax of the film, a sense of the uncanny is realised through the use of sound (or lack thereof) and unnaturally fluid or jerky movements. This creates a sense of unfamiliar terrain that's too often lacking in the horror genre. Small details are easy to miss-Annie appears to knock over a small bottle of paint, but on careful viewing it's clear that it falls over of its "own accord".

"Hereditary" is a rich and detailed movie that bears repeated viewing. Aster has said in interview that he wanted this film to be in the vein of modern horror classics of the 1970's such as "Don't Look Now" or "Rosemary's Baby". I think this film will be regarded as a classic of the genre decades from now. Having enjoyed "Midsommar" (though it's not quite so scary as this film), I am curious to see where Aster (who's still only 33) will go next.

Related posts
The psychology of tension and suspense