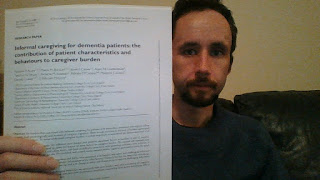 For the second half of my time with University College Cork, I was involved in a project researching carer burden in people caring for family members with dementia. As part of this project, I had the opportunity to sit in on a specialist memory clinic, as well as a parallel old age psychiatry clinic. Although some people (usually with less severe problems with memory) attended the clinic by themselves, the large majority of patients would have family members with them.

Over the space of two years we collected caregivers' responses to a series of short questionnaires assessing carer burden, as well information on challenging behaviours (e.g. shouting), levels of help required for activities of daily living (e.g. getting dressed) , cognitive performance, and patient safety (e.g. driving, risk of falling). Driving can be a particularly thorny issue for older people living in rural areas, where stopping driving represents a major loss of independence.

The results indicated that patient age, cognition, and level of dependence were associated with carer burden, and even after controlling for these factors, safety issues and challenging behaviours were associated with further increases in burden. We also followed up a subset of carers at 6 months and 12 months, and changes in patient safety seemed to be the most powerful predictor of changes in carer burden. I should note this data was only available for those who had follow-up data from repeat visits, so it is likely these carers could differ in systematic ways from those who did not attend again. Nonetheless, I would speculate that those who do not attend the clinic again within a year are probably likely to have experienced less change in the care situation than those who attend again (the latter are likely to have some change, leading to greater motivation to attend).

One reviewer of a draft of the paper suggested that safety could be highlighted and discussed in greater detail. It was one of those occasions when a peer reviewer suggested that a manuscript might be underselling an aspect of the findings. The literature in this area has tended to focus more on behaviors that can challenge caregivers or increased dependency of patients. However, safety issues are a major source of anxiety for carers, and can be the decisive factor in whether a person with dementia will go into long-term care home. Carer training programs and easily available information on how to address or minimize problems around safety can save carers a lot of distress.