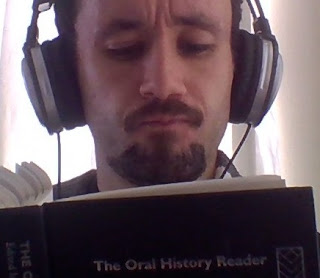 Our initial reminiscence group continues. Following some more personal autobiography, we start to probe memories of broader historical changes/events. I have suggested (taking suggestions from my colleagues and collaborators) the arrival of television and wider availability of cars as possible subjects around new technologies. The topic of television brings up memories of renting a television given the expense of buying one's own, and in turn leads to memories of telephones and the relative lack of availability in past times. One interesting suggestion from the participants was that of the washing machine (an innovation that cut down on a lot of housework).

Besides these changes that occurred relatively gradually, we also discuss distinct, one-off events. The visits of Pope John Paul II and John F Kennedy are recalled, along with the extent to which the two figures were idolised at the time. The Irish Times archive proves to be a good place for finding relevant images to provoke memory of these events.

A second historical session touches on elections and referendums. There seem to be numerous resonances with the present. With Brexit ongoing, a poster from the 1973 referendum on joining the EU (then EEC) threatens the potential of a deeper division between Northern Ireland and the Republic of Ireland. The potential for next year to see a referendum on 1983's eighth amendment has re-ignited the often bitter debate around the issue of the legal status of abortion within Ireland.

Although I want to keep things reasonably focused on the past (albeit this can be through the lens of comparison to the present), discussion of the 1983 referendum that introduced the eighth amendment leads into a discussion of more general thoughts/opinions about the issue/ethics of abortion. This is obviously something that has to be handled with sensitivity in larger groups with potentially quite diverse (and deeply held) views.

The boundaries between the political and social can become somewhat blurred. Discussion of economics relating to the referendum to joining the EEC eventually segues into a discussion of work practices in a particular industry, and how these skills gradually became outdated (unless one was working in a small company making bespoke material). Sometimes the history of one's society can be a more emotive topic than that one's own personal life, or at least particularly where one bleeds into the other.

Although I'm still trying to work out if/how this form of reminiscence is therapeutic, the participants in the group certainly seem to have enjoyed discussing their memories with us, and with each other. With the pilot group wrapping up, I'm looking forward to starting up new groups in multiple venues in 2018. Roll on next year!