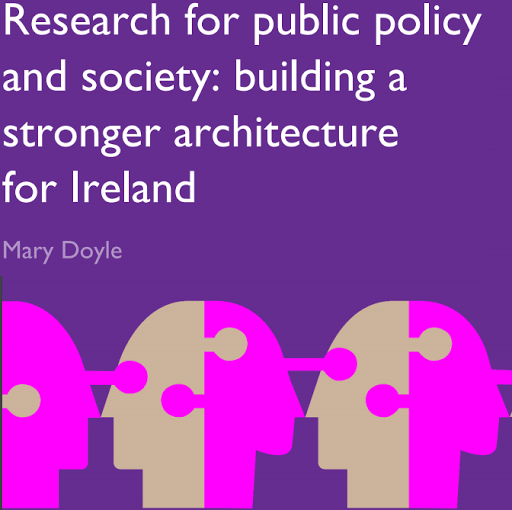 The research for Public Policy seminar series is a joint initiative of the RIA and IRC, aiming to bring diverse expertise together on the subject of evidence-based policy. The webinar on research for public policy on January 27th was one of three webinars in a series, with a discussion paper by Mary Doyle setting the scene for the meeting

Professor Jane Ohlmeyer described this webinar as part of a broader conversation. Professor Ohlmeyer introduced Minister for Further and Higher Education, Research, Innovation, and Science Simon Harris, pointing out the impact of the creation of the new Department in this area. Minister Harris pushed back against the (by now) old saw about people "having heard enough from experts", saying that policymakers are more likely to make mistakes when they don't listen to experts. He suggested that something good can come of the pandemic if research and innovation can take a more active role in society at large, and also mentioned the importance of multiple disciplines and their collaboration. He emphasised the importance of investment in research and innovation. Notwithstanding the pandemic crisis, he recognised we shouldn't just call on research just during times of crisis, but need to engage in long-term planning. He noted that innovation is not just about business, but also about policy; to this end, he mentioned ideas and programs about secondments for researchers into government agencies to allow researchers to be more cognisant of policy and how it gets made and implemented. He mentioned planning a drive for greater engagement between the general public and the research sector, on a greater scale than had previously been seen in Ireland.

Professor Jane Grimson (Trinity College Dublin) talked about how policymakers may identify a need but can't find researchers who are willing/able to conduct the required work. However, she suggested that a positive counter-example in health research in Ireland is the Health Research Board, which does a lot of policy-centric work. The bench-to-bedside journey is usually very slowly, but this was accelerated with unprecedented speed due to the pandemic crisis. Funding suddenly became available, policymakers and researchers started communicating more closely, more rapidly and openly, with knowledge being pooled internationally (on this note, she championed the importance of open research, and systematic reviews). But the rapid successes achieved during the pandemic were built on the back of years of slower research, from work on mRNA to methodological advances in epidemiology and data analytics.

Professor Peter Clinch (University College Dublin) noted that the phrase "we've had enough of experts" often based on a politically-motivated decision that goes against evidence. Professor Clinch said that there is a desire for research findings in Ireland in the UK, but civil servants and researchers are coming with very different approaches, and there needs to be better communication about what different jobs involved. Currently researchers and politicians often don't understand the rather different pressures they face in their careers. He highlighted the importance of investment, both for National Economic Plan and for National Development Plan, and that researchers should present a united front in their requests for greater funding at a broader level.

A video of the webinar is available on the Royal Irish Academy's youtube channel.

Posted by AndrewAllen at 4:13 AM No comments:

Have women been missing out on chances to maintain cognitive reserve?

At present, the majority of people with late-onset Alzheimer's disease are women. While there are a variety of reasons why this may be the case, one possible factor is reduced opportunity to maintain cognitive reserve. (Although it has been defined in subtly different ways, cognitive reserve is essentially the maintenance of cognitive performance in the presence of brain pathology due to a "bank" of greater cognitive resources over the lifespan, such as formal education or an intellectually stimulating job). For example, some women may have (or have had) less cognitive reserve if they have left formal education earlier.

A recent review paper has looked at this in depth. The authors highlight that much of the evidence that has been used to propose models of cognitive reserve has not looked at whether these models hold to the same extent for men and women, and so there may be underappreciated sex differences. Nonetheless, the authors did identify a number of studies that did grapple empirically with sex differences and cognitive reserve. (Although sex and gender are not the same thing, the authors noted that some studies referred to sex and others to gender, and sex differences may be conflated with gender roles; overall, it was unclear whether existing data would allow anyone to tease apart sex differences and gender differences).

Focusing on education in particular, the authors found two longitudinal studies that indicated that more years of education led to reduced incidence/prevalence of Alzheimer's disease, and this effect did not differ between the sexes, although two other studies found that years of education were correlated with reduced Alzheimer's risk, but only for women. So it would seem the studies did agree that education reduced Alzheimer's risk for women, although the evidence was more equivocal for men (one might speculate that perhaps young males are more likely to enter more cognitively stimulating work if they leave school early, compared to young females, or at least this has been the case in the recent past).

However, a cross-sectional study found that men with Alzheimer's disease had better performance on the MMSE than women of the same age with the same level of education, suggesting reserve was more beneficial for men (the authors of the review point out that this study did not assess neural pathology, so it may be the case that the women in this study had more advanced neural pathology than the men).

Although I've briefly focused on education and women in particular above, it is likely that people from various disadvantaged groups have less opportunity to develop cognitive reserve over their lives. Internationally, there are substantial differences in the average number of years people spend in formal education, and although great progress has been made globally in closing the gender gap over the last century, the female:male ratio for years of schooling is still around 85% for Asia, Africa and the Pacifics. The full paper below looks in more detail at other factors that can help to maintain cognitive reserve: