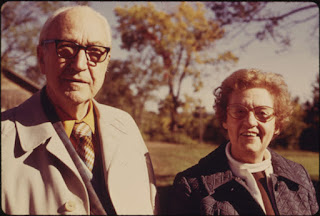 As someone who tries to use language precisely, I dislike it when terms stray into inaccuracy. For example, the phrase “making love” has tended to annoy me for years, as it is sometimes used as an all-purpose stand-in term to describe any sexual intercourse. Although I’m sure such inaccuracy isn’t the intention (people just want a euphemism), the term nonetheless seems to imply that sexual activity is somehow inherently loving. However, this pet peeve is a bit flippant compared to a somewhat similar example I’ve noticed more recently.

In my recent work on dementia caregivers, one can end up thinking quite a bit about the best way to use language in describing patients and those who care for them. The majority of dementia carers who aren’t professional carers are either children or spouses of the patient. However, you do see siblings, sometimes nephews/nieces, or even friends or neighbours. “Carer” or “caregiver” (as opposed to “family member”) works fine, as it describes what they do.

What then is the best single collective term to use for those being cared for? “Patient” or “person with dementia” is fine, but doesn’t capture who they are with relation to the carer. “Family members” covers most, but not all, patients with unpaid carers. “Loved ones” looks like a good one -the patient doesn’t have to be a family member of their carer for us to call the patient a “loved one”. And does it not capture the idea of care as loving? I recall seeing a video of an elderly man caring for his wife with a caption along the lines of “If this isn’t true love, what is?”

One afternoon, while speaking with a carer, she took the opportunity to share some of her thoughts and feelings. She had been caring for her husband with dementia for a number of years. After speaking more broadly about caring for her husband, she came to the topic of love and marriage: “You know, sometimes I ask myself whether after x years of marriage, do I still love this man?…And really, the answer is no. Well, you’re a young man-I suppose it’s something you’ll understand when you’re older…”

Another carer (again caring for her spouse) spoke of how she no longer loved her husband at a gathering of carers. She added that it’s not something she felt she could say to her (adult) children. Maybe she just wanted to get it off her chest when speaking to other carers, or perhaps she wanted to see if she wasn’t the only one who felt this way. On hearing what she had said, another carer (caring for a parent) suggested that maybe the first carer didn’t like her spouse any more, but she did love him. The first carer who had spoken of her feelings restated them.

I can see how people might identify with the carer who made the “not liking, but still loving” suggestion. Perhaps there is a temptation not to take these statements about an end of love at face value. We could be suggesting that carers perform love, even if they don’t feel it, if we say things like “If this isn’t true love, what is?” But if we try to downplay these feelings (or lack of feelings), are we not also downplaying how, in some cases, there is great social pressure to stay in the full-time carer role? (Particularly if society at large is not giving them enough help). And are we not more generally downplaying the level of altruism such carers are showing?

Related posts
He ain't heavy, he's my carer
Posted by AndrewAllen at 1:39 AM 2 comments:

A brief guide to accusing someone of hypocrisy

A man who moralises is usually a hypocrite.
Oscar Wilde

"I consider myself a vegetarian because there is no meat in here." A tongue-in-cheek comment in the 2am queue in McDonald's from some woman I had met an hour or two previously. In an argumentative train of thought and taking her comment a bit too seriously, I nonetheless refrained from voicing aloud the idea that she was doubly hypocritical; firstly for describing herself as a veggie when she eats meat and secondly for dissing McDonald's when clearly about to buy their stuff.

But when is it best to accuse someone of being a hypocrite? It's something I've thought a bit over the past while. Here are some questions to consider:

1. Is the person really a hypocrite?

To state the obvious, being a hypocrite involves saying/doing something and then doing/saying something else that contradicts that. It's worth thinking clearly about whether the person has really done anything or is just giving one opinion and then opining differently later on. (This may be harder in the case of politicians or more powerful people, where speech acts may have quite tangible consequences).

1b. Do they just have a short memory about something they previously said?

People are notoriously inconsistent about their preferences and opinions, including those about hypocrisy itself, and may at different times believe that something is THE most important aim. "You must respect others' religious views" and "the rights of women should be upheld" may strike the same person as very highly important principles, but depending on the situation one particular view may be more salient than the other. As a result, they may segue from suggesting that westerners should leave religious minorities alone to advocating (or maybe even engaging in) strong intervention if women's rights are in some way compromised by a religious minority.

1c. A question of extent

If a person is vocally against a strong instance of a crime, are they a hypocrite if they commit a much milder version of the same (or very similar) crime? Unfortunately, we all have to live in a physical and practical world. It would be nice to always live up to the standards of a particular view, but this may not always be very practical...

1d. To what extent can they freely choose their actions?

Without wanting to get bogged down in a debate about free will, someone may be pressurised into selling out their views. If someone is threatened with job loss, blackmail, or even harm to their family they may be pushed into actions that contradict their genuinely-held values.

1e. Are their actions as an individual inconsistent with their views on broader societal issues?

The anarchist drawing the dole, the climate change warrior driving their petrol-burning car...If the person is vocally advocating for societal change, do their actions as an individual really have to stand up to what they are advocating for society at large? If someone speaks out against violence against women (a societal issue) but is controlling his wife with threats of violence, that's pretty damn hypocritical. However, the climate change warrior is probably only making a negligible contribution to the problem (whereas one guy battering his wife is a clear wrong per se). Furthermore, the advocate for societal change still has to exist in a society which may not allow them to function without contributing in some way to climate change (see also 1d above).

It's worth pausing to think why you want to accuse someone of hypocrisy.

2a. Is your key aim to prove your own point?

Are you using the person's hypocrisy about a matter as a way of "proving" that their stance on an issue is wrong? This is a logical fallacy. Maybe there are better examples, but a topical example in Ireland is that many pro-choice advocates seem to point out the (sometimes glaring) hypocrisy of various pro-life individuals or institutions and just leave it at that, without going on to make their own case for why the freedom to choose to have an abortion/bodily integrity outweighs the preservation of the fetus/embyro/zygote etc.* This can be self-sabotaging, as one misses out on the opportunity to showcase why your point of view makes sense in its own right.

2b. Are you trying to discredit the person, or their argument?

Pointing out hypocrisy may go some way towards undermining your opponent's argument/actions, or at least their rationale for speaking/acting this way. However, is the real agenda here to actually undermine people's perception of your opponent's character?

Given some of the issues raised above, most people with an opinion may come off as a bit hypocritical at some point. In this sense I wonder how much of a character assassination an accusation of hypocrisy really is (unless the really damning thing is some awful act they committed that they're now being a hypocrite about).

In any case, deciding what your key aim really is will help in making a more cogent case.

2c. Do you actually want to get through to the person?


3. How can you get through to the person?

Perhaps you really feel this is a moment where you can show someone the error of their ways, or at least a contradiction in their thought patterns. But consider...

3a. Do they actually care?

The expressed opinion of the person may simply be telling people what they want to hear, before pounding out business-as-usual in their actions.

It can be surprising how often one is fighting a lost cause.

3b. Will they think that you are just trying to discredit them as a person or just using their hypocrisy as a "proof" of your own point-of-view, or defence of your own actions?

If they think you're falling into some of the positions mention above, then they are unlikely to think that they're going to actually pick up anything worth learning by listening to you.

3c. If you're outlining their opinion, are you giving a fair account of what they've said?

As argued by Daniel Dennett and others, one should try and develop the best account of what your opponent is really trying to argue, or what the aims of their actions are, before you start criticising them. Going after a straw man is not really the best use of one's time.


Obviously these suggestions are easier to make than to follow. Just earlier I saw an argument online that seemed somewhat contradictory, and I nearly went off on a train of thought whereby I speculated that the person would engage in a number of other hypocritical arguments (that were purely imagined by me at this point). Had I put anything down in writing I'm sure I would be failing to heed a number of points here.

What a hypocrite, ay?

*This is just an example of how someone might frame the debate on this issue; I realise people may have more/less utilitarian stances on this.