Wrap your brain with germs: Myelin and bacteria

One of my main areas of interest is the interaction between the brain and the gut. In trying to better understand how this can happen, a powerful animal model has been the interesting case of the germ free animal, which is born (believe it or not) without a microbiota. As one can imagine, this can lead to major effects upon digestion, but increasing evidence has also suggested that germ free animals have altered behaviour, such as changes in anxiety-like behaviour and reduced social behaviour. This suggests an impact of gut microbes on the brain, and has ignited interest in what kind of factors might be mediating this relationship.

Recent research from APC Microbiome Institute, UCC, suggests that germ-free mice have increased levels of myelin, the fatty sheath that surrounds brain cells and assists in the transmission of brain signals. This change in myelin was clearly observed in the prefrontal cortex, a region of the brain responsible for more complex cognition, including behavioural changes that have previously been shown in germ free mice. Interestingly, giving the mice a microbiota restored typical myelination, deepening the evidence for a causal link between the two, and suggesting that the effects were reversible.

The authors believe the findings could have relevance for multiple sclerosis, which is a disorder of myelination, although one would imagine translation from quite a blue-skies study like this to the clinic will clearly take time. Multiple sclerosis is also related to dysfunction of the immune system, which has been implicated as a pathway within the gut-brain axis, so perhaps this will be a key topic within future research within this area.

It was encouraging to see the findings being picked up by The Guardian and other news outlets, which will hopefully help further fire up the public imagination about the gut-brain-microbiota axis. Stay tuned next month for more on this topic! 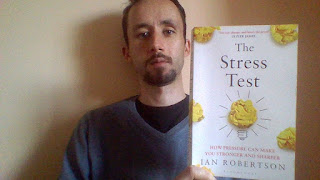 I recently had the pleasure of seeing Professor Ian Robertson speak at our Dept of Psychiatry international seminar series, having seen him previously at the School of Applied Psychology. His latest book looks at how differing levels of stress can impact upon our ability to think well. Aimed at a broad audience, the book is a page-turner (I read the first 100 pages in almost one sitting). It has a strong sense of narrative drive, with Robertson following each of his research findings with a questing curiosity to know more about why people are thinking/acting the way they are.

In addition to being Professor of Psychology at Trinity College Dublin, Robertson has worked as a clinical psychologist. The cognitive and emotional problems that have beset the clients he describes in this book have acted as catalysts for his work in trying to understand processes like stress and attention. Neuroskeptics within psychology may roll their eyes at Robertson referring to brain regions being activated during anecdotal illustrations of behaviour. However, Robertson does not simply use experimental neuroimaging work to speculate on the brains of clients or other interesting people; he describes how he has been involved in developing a relatively simple, non-invasive biomarker for noradrenaline levels; pupillary dilation. This marker has been useful in numerous contexts, such as studying how people of varying IQ's respond to tasks of varying levels of challenge, in terms of their noradrenergic activity.

Probably the key idea running through the book is not a novel idea, but one of the classic ideas in psychology; that of the Yerkes-Dodson law. Basically, when arousal is either low (e.g. fatigue) or high (e.g. bad stress), performance will be sub-optimal, but when it is moderate (e.g. a little stress, but not too much) performance will be better. For those interesting in digging a bit deeper into this, this law is not without criticisms of oversimplification, with some suggesting that reduced information processing induced by very high stress may be a good thing under certain conditions (e.g. where focused attention on a very dangerous stimulus is required and a simple response that is not too cognitively taxing is required). Nonetheless, Robertson illustrates interesting applications, and his case acts as an antidote to the promises of eliminating stress one often hears coming from those trying to sell a stress reduction technique.

I have been interested in the interaction between stress and sustained attention for a while, but Robertson's insight (and research) that people who are more prone to mind wandering are more unhappy is quite a new idea for me. The underlying mechanism is that we are prone to a certain negativity bias in daydreaming. This suggests a possible psychological mechanism for stress-reducing effects of mindfulness, by maintaining attention on the present moment rather than fitful daydreaming about anxieties around the future. It could also explain why Csikszentmihalyi's concept of flow is often described as a positive feeling.

The Stress Test makes suggestions throughout about how to respond to stress and other potentially difficult feelings*. These suggestions are generally rooted in a cognitive-behavioural perspective (you see a classic CBT concept making an appearance when Robertson blames a lack of any stress in childhood for catastrophising stressors in adulthood). One interesting titbit is the re-direction of high-arousal negative emotions (like anxiety) towards emotions that are still high-arousal, but more positive (like excitement), as a more workable alternative than trying to get rid of the negative feeling altogether.

The question of to what extent people feel empowered to help themselves arises in an epilogue, where Robertson suggests that the widespread use of medication to tackle emotional problems may undermine clients' sense of agency around their own emotional lives, by making them see their problems as something external to themselves that has "come upon" them. He suggests that such a lack of agency is rooted in a folk understanding of human biology as more fixed or unchangeable than human psychology. I would suggest that there may be a greater need for public understanding of how intertwined biology and psychology are. To take the example of genetics, the public should be more aware that although one is endowed with a genotype at birth, given gene X environmental interactions and epigenetic mechanisms, one's genes need not act as a life sentence, particularly for complex social psychological processes. Nor should (one would hope) the use of psychiatric medication strip people of their agency, or indeed of a sense of responsibility to work through their own psychological issues at the level of cognition and behaviour.

"The Stress Test" is a compelling book on what places us under pressure, how to deal with that pressure, and-more interestingly-how to use that pressure. It deserves to be read by people who are experiencing stress, which I dare say is most people.


*Although thankfully it avoids the three-actual-ideas-to-two-hundred-anecdotes ratio one sees in too many self-help books!

Posted by AndrewAllen at 1:05 PM 2 comments: