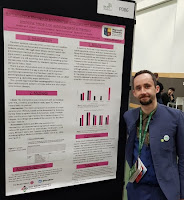 For the first time, the British Neuroscience Association held its Festival of Neuroscience outside the UK. Risking a Brexit crash-out which thankfully didn't come to pass a couple of weeks before the festival, BNA2019 was co-hosted with Neuroscience Ireland at the Convention Centre in Dublin city. The venue was a good size for the meeting. Although the posters covered everything from benchwork to animal models to my own poster describing reminiscence therapy and a rare memory disorder, the poster space was physically concentrated enough to get a good level of engagement going. The exhibitors included not just the usual publishing houses and companies with new toys for technique junkies, but also a career zone for job networking and a "credibility zone" to act as a thinktank for increasing factors such as reproducibility to allow neuro- and other scientists to be better able to stand over the validity of findings.

Speaking of which, a highlight of the conference was the chance to see autism researcher Uta Frith grapple with the thorny issue of the replication crisis within psychology (and empirical research in general). She called for a move towards "slow science", with theories being tested more carefully, and resisting the temptation to publish anything as fast as you can out of a fear of getting scooped. Perhaps the most impressive research plenary came from Ileana Hanganu-Opatz, who is using electrophysiological techniques to study connectivity in the brain. John Cryan (pictured centre below), whose group I have worked with, also chaired an interesting symposium on diet, brain and microbiome.

There was a great breakout session on political advocacy. Although it could have been better attended, there was a serious discussion from those in attendance about issues around how to make biggest impact in getting through to politicians (and indeed others in the public sector who are less visible but perhaps more influential) about the importance of investing in neuroscience funding. There was a particularly interesting case study of when the BBSRC made major cuts to brain research around the start of this decade, and how brain scientists leveraged the media to push back.

But this wasn't just talks and posters: this was a festival of neuroscience. There were a ton of events around the city, including theatre, dance, music and visual art. I got to the opening of Joanna Hopkin's "Connecting" exhibition. (I felt I had better show up as I had helped Hopkins to access an MRI scanner to inform this piece.) The minimal techno of the scanner pervaded the exhibit, a highlight of which was the strange homonculus pictured below. The work conjures up images of embodied cognition under an anatomical gaze. 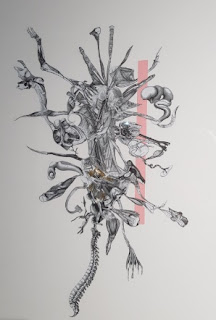 The Age of Arts was a great way to finish up, with a performance from the MISA choir and a commandeering of the audience by Jane Bentley to produce a percussive musical act. There were also talks from a number of people at the Global Brain Health Institute, and a representative from the Bealtaine festival, with a spirited discussion on whether the intersection between art, science and health could be used to undermine the inherent value of the arts. As a psychologist I know that it's easy to describe projects in any funding bid I write as being about all these things and more.

BNA2019 has been a huge undertaking, and any individual's perspective can only capture a snapshot of this event. I've come away with a renewed enthusiasm for the creativity that goes into both science and art. Francesca Farina noted at Age of Arts that science and art may not always have been thought of as separate endeavours; perhaps they are drawing closer together once again.

Back with blog and book

Hello there, after a hiatus I'm back to this blog. Since my last post I have been working on an awesome/cool/savage podcast with writer and broadcaster Gareth Stack, Psychology in Mind.  I've also set up a Twitter specific to my blog: follow @ArchivePsych

I've been working on a book, a sort of fiction/non-fiction hybrid. Expect some excerpts to appear here in the coming months. Here's a brief outline:

"Manipulate" (working title) comprises an introductory lecture series to psychology, juxtaposed with the life of Professor David Hector, who is delivering these lectures. During his lectures, David espouses high ethical standards (albeit in a cynical manner). Outside of teaching hours, David emotionally abuses his husband and mistress, bullies his colleagues and is facing accusations of sexual harassment. Although he has thus far led a charmed life, his increasingly brazen manipulation of others is causing his professional and personal life to unravel.

The segments of the book include (a). events in David’s personal life, (b). a lecture from his introduction to psychology module - these lectures are interspersed with David’s thoughts as he delivers the lecture, and (c). events in his work at the university.

Posted by AndrewAllen at 7:09 AM No comments: