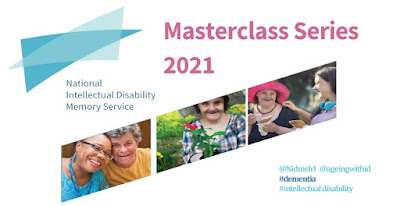 I've been attending a masterclass by the National Intellectual Disability Memory Service. The latest session looked at Cognitive Stimulation Therapy for Dementia, with a focus on specialised services for people with intellectual disability.

Gunnar Scheibner (clinical psychologist at St Michael's House) gave a brief introduction to CST. It is a brief psychosocial intervention developed by Aimee Spector to improve or at least maintain cognition and mood. It combines elements of different approaches (e.g. reminiscence therapy, art therapy). It's recommended that it's conducted in small groups (ideally no more than 6 clients taking part). Scheibner pointed out that it's very cost effective; CST does not require much equipment (e.g. some means of playing music, art materials, often available already in care settings), don't need to have highly trained staff. (However, Professor Mary McCarron did mention that a certain level of group facilitating skills are important.)

CST is particularly interesting for people with intellectual disability, who are more likely to develop dementia, particularly people who have Down syndrome. However, the current data is very limited for this particular population. Some work by Orrell et al. found a positive impact on family relationships, but not on cognitive functioning. Shannahan found some improvements in cognitive functioning in people with intellectual disability but without dementia.

Pauline Smyth, from the Brothers of Charity Roscommon, described how her team were working with clients who were living with dementia. Her team became interested in CST and they wanted to find an evidenced-based, post-diagnostic support for people with dementia. Smyth emphasised that CST should be delivered in the context of good person-centred care, and cited the importance of social inclusion - the CST group can be an opportunity for social connection.

For people with intellectual disability in particular, it's better to have smaller groups than with general population, probably no more than 4, also allow greater amount of time per session (e.g. don't want to rush for creative activities). Important to have knowledge of people's preferences (e.g. what music/hobbies they like, their ability/willingness to continue with the sessions for their duration). For cognitive stimulation, Smyth advised to be careful not to put any individual on the spot; rather, it's important to have a fun/enjoyable atmosphere, and to try to avoid school-like vibe. Consistent with the point about social connection, she said it is worth being vigilant that people are included (e.g. someone might be under-engaged, but could benefit from another participant pairing up with them). For reminiscence, care is required not to push people into talking about painful memories (notwithstanding there can be good and bad in broader memories).

Dr Janette Tyrell emphasised the importance of using non-pharmacological approaches such as CST (notwithstanding the utility of medications such as those targeting acetylcholinesterase etc.). In her clinical opinion, the more services use techniques like CST that keep people active, the less you see the negative behavioural manifestations of dementia. During the COVID-19 pandemic and lockdown, a lot of people have had opportunities for cognitive stimulation reduced, so it was positive to note that a lot of people are doing activities online at this time. The pandemic does seem to have motivated more people with intellectual disability to get more involved in using platforms like ZOOM.

A question was raised about running CST with people who have more advanced dementia. Gunnar Scheibner cited a PhD student was who is doing work in this area, and the results will be interesting to see. Pauline Smyth suggested not trying to have people at very variable levels of cognitive impairment (consistent with pitching tasks that are doable for the people who are taking part).

It was certainly an interesting masterclass. I did wonder whether there are a lot of services doing things like cognitive stimulation therapy without necessarily labelling it as such. There are a lot of people with intellectual disability out there (along with families and services) doing their best to keep active during the pandemic, though as one of the panellists noted, a lot of people in general are languishing.

Individualised supports for people with intellectual disability and dementia

While looking for something to discuss at a journal club in work, I came across an interesting paper about individualised supports for people with intellectual disability (ID) and dementia. Over the last 50 years, life expectancy has increased substantially in people with ID. Compared to the general population, this cohort has a higher prevalence and earlier onset of dementia. A systematic review found that psychosocial interventions for people with dementia have rarely been implemented with those with both dementia and ID.

This study by Watchman et al. included five co-researchers with ID who were involved from the initial grant application onwards. The team sampled participants from multiple settings (living alone with some outreach support, group homes for PwID, and generic care home). For the psychosocial interventions, a resource called Jenny's diary was used as a starting point to discuss possible intervention components (e.g. design changes to home, reminiscence), so participants could select intervention activities that appealed to them as an individual.

The researchers used a bespoke measure of studying effects of intervention on behaviour (examining observed behaviour, “observed mood”, body language and verbal communication), to capture this “in the moment”, as well as assessing quality of life with a more standardised measure. They also conducted semi-structured interviews with social care staff, as well as generating data with PwID and dementia, using photovoice (a participatory research method which involves the use of photographs to convey the meaning of different lived experiences).

Participants had between two and six interventions, and most interventions showed “in the moment” positive effects. Nearly three-quarters of interventions were described as having met or exceeded their goals. The results less clear for quality of life scores, which fell at mid-point before increasing.

From the semi-structured interviews, social care staff described interventions positively, that they ”brought them (the participants) back”. Key themes were: enabling care (allowing participants to have choice about what interventions were being used, having one-on-one time with staff), interventions for practice (a key point here was a change in perception from seeing interventions as adding to work burden to viewing them as timesavers overall, e.g. by reducing agitation).

From the photovoice images, key themes included the importance of friendship, involvement in future planning (photos included images from Jenny’s diary), and fear of dementia (with an associated fear of return to institutional care/change in living situation).

I thought this paper was interesting, with a wide range of measures and methods to gain a greater understanding of interventions for people with ID and dementia. The use of in-the-moment assessment can overcome difficulties in displaying effects of interventions with retrospective (even recent retrospective) measures.

I wondered to what extent photovoice was a reproduction of materials presented to participants (e.g. Jenny’s voice appeared as an image). However, it may be worth comparing with extent to which participants from the general population can bring truly novel ideas when guided through semi-structured interviews etc.

Detecting dementia in people with ID