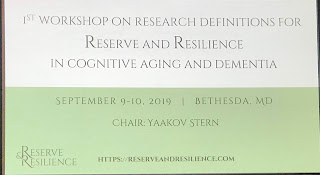 Having had the good fortune of receiving a generous travel award from its committee, I visited Washington D.C. for the Reserve and Resilience workshop. The meeting is the first of three annual meetings that aim to create a consensus around definitions of key concepts in this area, such as cognitive reserve, brain reserve, and resilience.

The conference had a very focused structure, with keynote speakers giving very brief presentations restricted to three PowerPoint slides. Each was required to give the definitions they used for key terms relevant to the meeting, such as cognitive reserve, brain reserve and resilience. This made visible some of the distinctions between how people in the field had somewhat different conceptualisations of the same words. To give just one example, in defining resilience, Catherine Kaczorowski included the repair and replenishment of the brain in response to damage, whereas Emrah Duzel was working with a definition of resilience as preventing a decline in neural resources in the presence of manifest pathology.

Such differences in how the same concept may be understood or operationalised could undermine replicability of research. For any given study, larger researcher degrees of freedom allowed by different definitions of the "same thing" could lead to Type 1 errors, and even if a further piece of research is labelled as a conceptual replication at one level, if the concept in question is being operationalised in different ways then it may not be that findings relating to specific outcomes are as reliable as we might think.

The keynote presenters talks were kept unusually short in order to allow more time for questions from the floor. Although this sometimes fell into people trying to plug their pet projects rather than grappling with the key problem of the meeting, there was some very productive discussion. One  point that influenced a lot of subsequent discussion is how the definitions we work with can be looked at at a conceptual, operational, and mechanistic level. There was also some discussion about whether to combine some terms, such as brain and cognitive reserve, although my impression was that by the end of the meeting the delegates felt that it still be useful to have the distinction between brain and cognition (notwithstanding the occasional statement that came close to endorsing a simplistic one-to-one correspondence between the brain and cognition).

The meeting closed with a commitment to continue working together between now and next year's meeting. The organisers are keen to promote data-sharing between people involved at the meeting to further collaboration. They have also helpfully made the presentation slides available online.

At larger conferences it can be easy to get lost when their range of topics are so broad and aims so diffuse, but this was a smaller and intensely focused meeting. The inclusion of three key papers to read posted in advance on the conference website was surely a statement of intent, and the organisers were careful throughout to keep pushing for the key aims of the meeting to try and sound out how we should talk about these concepts. By the close of the third meeting it is hoped that there should be some broad consensus on reserve and resilience-for anyone working in this area it will be worth feeding into this process in the coming two years.

Posted by AndrewAllen at 8:24 AM No comments: