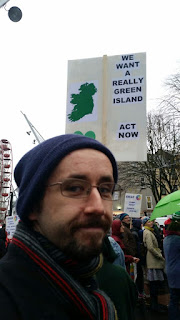 Today I participated in the local march to coincide with the climate talks at Paris.

What does psychology have to say on climate change? Clearly, behaviour change at an individual level will be hard-pressed to address the problem. Why change our behaviour in the sense of making large individual sacrifices when we can work as a society to make the things we enjoy renewable? Nonetheless, such change takes political will, and this is driven by social psychology.

Research by this team at Cardiff found that people who held sceptical attitudes towards climate change assimilated information in a given article differently from those with less sceptical views. A fairly classic result, although interestingly the attitudes of the two groups did not become polarised (i.e. the scepticism of the sceptical group did not increase more markedly). Another study indicated that levels of certainty on this issue were higher among "believers" in climate change compared to those holding more sceptical views, suggesting that the sceptics may be more amenable to change their viewpoint. However, it should be noted that levels of scepticism were low in the (British) cohort studied.

Work done across Europe and the USA has brought home the idea that climate change is often secondary to other issues and concerns in people's lives. Efforts to build support for fighting climate change may have to frame concerns about climate change in a manner that chimes with other localised concerns (flooding in Cork?) to actually generate political will. Recent research from Australia*, which I dare say has broader applicability, has indicated that people with a stronger sense of global attachment have lower levels of scepticism around anthropogenic climate change compared to those with a stronger place attachment at a national level. Interestingly right-wing authoritarianism and social dominance seemed to mediate the effect of national place attachment on climate scepticism. (I wonder where these nationalistic climate deniers are going to send asylum seekers when Nauru is underwater, but I digress).

Clearly such scepticism is in the interest of those who gain from fossil fuels. Perhaps the biggest issue is to create more motivation/incentives to get more people moving us faster toward 100% renewables? As one speaker at our local event noted, if/when we make enough renewable energy to do everything we want to do, then much of this fight will be over.

*Australia has been found have a higher level of climate scepticism than either the US or the UK.
Posted by AndrewAllen at 12:29 PM No comments: 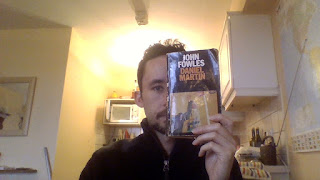 "Daniel Martin" follows the character of the title back and forth through between his youth and middle age. Though it is not without plot, the book is more of a character study, and does not have the same narrative drive, as the more widely-read "The Magus". John Fowles does not follow the "show, don't tell" school of describing people's feelings. Inner lives are laid out in clinical detail, either in the protagonist's thoughts about himself and his life, or in conversations like chess games with other characters. Notwithstanding the rather postmodern self-awareness of the characters, the book manages to touch rather directly on some topics.

One theme running through the novel is that of intergenerational concerns (particularly the middle aged Daniel's concerns about his previously estranged daughter, as well as the contrast between his life as a film producer and his own father's quiet life as a minister). It's an interesting time to read the novel, when the characters in their twenties would now be around the age of an older Daniel Martin (the book was written in 1977). Some passages have interesting parallels with contemporary complaints which are often presented as if unique to a post-Web 2.0 era-consider the following, concerning people taking cameras on holidays:

"A lifelong avoider of other tourists, he had forgotten the extent to which every man is now his own image-maker. It was almost frightening, this obsession with capturing through one sense alone, and one that required...so little thought or concentration: a mindless clicking....Perhaps it was the ultimate privilege...merely to duplicate seeing, to advertise in some future that one had been there."

The book also has a particular preoccupation with "Englishness". It's not outlandish to suggest that particular nations have distinct characteristics, including the case of one with a colonial past like England. At the same time I feel that there's little Fowles says about the Englishness that could be applied to other places. In writing a novel in my early twenties I recall wanting to write a book not about being an Irish person particularly but one about being a person of the Western World (hence the characters were a mix of Irish, UK and US citizens). As a film producer, Daniel Martin divides his time between the UK and US (as well as travelling to Egypt and Syria later in the text), although Fowles seems to use this more to draw contrasts than to note commonalities of the Western experience. Perhaps this urge on my part is partly borne of globalisation having taken great hold than in the 1970's.

If you're willing to spend some time with characters that aren't going to plead for their own likeability, this novel has enough enjoyable insight to reward the reader.

Related posts
Review: "A girl is a half-formed thing"
Posted by AndrewAllen at 4:27 AM No comments: