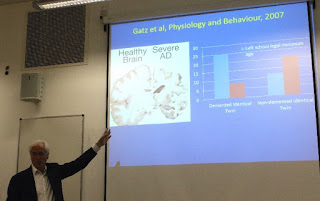 As the global population ages, an increasing number of people are caring for family members who no longer care for themselves. Research is needed to better understand potential risks for caregiver health, and the best means for intervention where needed. Four leading researchers in this area, both Irish and international, gathered at the Brookfield Health Sciences Complex, University College Cork, to present their work.

At the first session, chaired by Professor Timothy Dinan, Professor Ian Robertson, Trinity College Dublin, highlighted the resilience of caregivers, outlining findings that most caregivers report good (or better than good) mental health. He drew on the classic Yerkes-Dodson law to outline how a medium level arousal is generally optimal for performance-so perhaps the stress that caregivers experience may not be detrimental unless it is quite high, or if it is coming on top of existing stressors.

Professor Janice Kiecolt-Glaser, Ohio State University, drew on her substantial catalogue of research in this area to highlight the often detrimental impact on immune system of dementia caregiving. Carer burden may heighten inflammation that is often already elevated by the ageing process in older spousal caregivers (a bit like a physiological version of the Yerkes-Dodson law highlighted by Ian Robertson). It can also be associated with heightened activity of the HPA axis, with increased release of the stress hormone cortisol being evident in caregivers.

At the second session, chaired by Professor D. William Molloy, Dr Rónán O'Caoimh, NUI Galway, highlighted the excellent work he has done with Professor D William Molloy and others to develop a tool for assessing risk of negative outcomes for dementia patients in the community. This work places an emphasis on the caregiver network- a primary caregiver typically has support from others around them (e.g. a spousal caregiver with adult children who pitch in at evenings/weekends). He raised the interesting point that although an increased network may intuitively seem positive, it may actually be a warning that an extended family is trying to rally around an increasingly impaired patient, or primary caregivers who are becoming less capable of coping with their role.

Professor Constança Paúl, University of Porto, highlighted the complexity of factors moderating the caregiver experience and whether it leads to stress. Factors such as the relationship between the caregiver and the care recipient and length of care were highlighted. Age is generally considered and controlled for in studies, although Professor Paúl made the important point that stage of life is important too (e.g. two people caring for their mother could be the same age, but one has children of their own aged 21-25 whereas the other has children aged 8-12). She also highlighted some broader trends that could have large implications for care requirements in the near future-for example, within the EU, almost half of woman aged 85 or more are living alone.

There was a great dialogue at the end of the session. Although the seminar had been primarily advertised as a researcher/clinician event, a number of carers were in attendance who brought their own perspective. An interesting point was the highlighting of issues around guilt in seeking help outside the home among some caregivers, and how this may lead to a reluctance to explore the option of long-term care, or even to seek respite, regardless of the quality of care available.

The session would not have been possible without generous funding from the Health Research Board, as well as the substantial organisational work of Poonam Gururajan (check out her wedding blog here) and the experienced guidance of our PI Dr Gerard Clarke.

Related posts:
He ain't heavy, he's my carer
Performance under pressure
Posted by AndrewAllen at 1:24 PM No comments:

Mindfulness update: One year on

For the last year, I have been getting into mindfulness, which uses various techniques to cultivate a non-judgemental awareness of the current moment. With mindfulness and meditation, one's practice can wax and wane over the course of a year (as it can with many things), and I'm no exception; up until about a month ago I was practising meditation quite rarely, although I was trying to have a mindful attitude when stressors arose.

But a few weeks ago I was brought back into the swing of mindfulness. A seasoned instructor in mindfulness-based stress reduction (MBSR) gave me a lend of the book "A Year of Living Mindfully" by Anna Black-funnily enough, this happened about one year after I finished her MBSR course. It has spurred me to get back on the horse for year 2 of my practice.

One thing that has stood out so far in this book: an attitude the author suggests one should cultivate as a practitioner of mindfulness is non-striving. Although I'm not particularly prone to stress as such, non-striving is one attitude that does push against my personality. I am someone who strives to do well/get on with it/get the most out of life. Although I don't think it's realistic for me to get rid of my aspirations in any lasting sense, like anyone I can let them go when I don't need to be actively working towards them. Easier said than done-a certain restlessness hangs over ambition.

I think I am starting to become more mindful at certain times when I am not actively meditating, for example when exercising. I think this is my second favourite time to be mindful (after times when I am confronted with a stressor), as it is an activity that for me does not feel like moving towards a particular end (even though it is, of course, aimed towards better health). Its repetitive, cyclical nature differs from the more progressive (and sometimes frustrating) nature of research work.

Speaking of work, we're hoping to trial-run some recordings of mindfulness activities over the coming week. The overall aim is to put together a mindfulness podcast with the previously mentioned MBSR instructor. Should be fun!

Related posts:
Mindfulness and the mind
Mindfulness update: 6 months on
Posted by AndrewAllen at 1:24 PM No comments: