Why a randomer could NOT have told you that

(The title is a play on Susie Hodge's book on visual art, "Why your five year old could not have done that")

As someone who studies psychology, few things grind my gears like someone pointing out that the latest psychological findings are something that their grandmother could have told them. Regardless of how much psychological insight their own grandmothers may have, there are always some people willing to tell you that you are wasting public or private funds on investigating a question to which people have known the answer for generations.

If someone says they are a quantum physicist or a brain surgeon, most people who do not share the profession would be hesitant to try and opine on quantum physics or brain surgery. Regardless of what you do in life, however, it is likely that your mind is geared to some extent towards developing theories about the thoughts of others around you. You see two managers in work who employ very different management styles, and you come up with hypotheses as to why each manager chose that style, as well as which style works best with which employee. You are spending a few weeks studying for exams, so you test which learning strategies work best to help you memorise as much information as you can.

..and people have been doing this since before there was a discipline called psychology. So of course, when you see a news report on a new finding from a psychological study, it chimes with something you heard from someone else, who was really just speaking from good old-fashioned experience and a bit of introspection. When you remember what that person said, it may feel that what you’re hearing is not really news at all.

So why bother doing psychological research? Here’s a couple of quick reasons why…

At a basic level, empirical psychology can be used to quantify the extent of phenomena we may already be aware of. The fact that people were willing to comply with Milgram’s commands to administer high electric shocks to strangers may chime with people’s intuitions, but the rate of compliance was considerably higher than predicted. We all know that staying awake all night is generally not good for reaching optimal performance, but is it enough to make junior doctors perform worse at the level of basic attention? This is an empirical question.

But we can go further in saying that psychological research can often demonstrate the direction of an effect (i.e. whether x increases or decreases y), where everyday theorising would fail. Why? It’s worth bearing in mind that intuition can come up with two opposing predictions that both make sense at an a priori level.  What effect does stress have on cognition? Well, it’s distracting, so it should have a negative effect on how you think. No wait, it’s motivating, so it should have a positive effect. But when people see a report that confirms one, they may only think of the intuition that chimed with the observed effect, thereby making seem that the researchers were just stating the obvious.

Even when armchair psychology is prone to predicting an effect in a particular direction, the research may contradict this. A while back BPS digest published an interesting post concerning counter-intuitive findings in psychology. Check it out!

Related links
On established validity and good questions
Posted by AndrewAllen at 4:14 PM No comments: 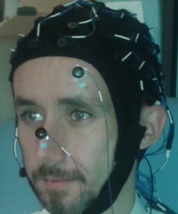 Why hello Andrew, what brings you here?

Hello Professor, I’ve been studying the brain and the mind for some time now, but I want to find some way of gaining greater insight into how the function of the mind-you know, thinking, emotion and so on-is produced by the physical brain. I just want an intuitive, first-hand sense of how it all
happens!

Well Andrew, I have just the thing for you! This is the autocerebroscope; a device will allow you to see inside your own brain as it works. Let’s say you’re eating a delicious falafel-flavoured chocolate. The autocerebroscope will show you the oxygenated blood flowing to your occipital lobe as you process the visual stimulus, your motor cortices working to chew the food, your nucleus accumbens going into overdrive as you feel the intense pleasure of the tasty choco…the works!

Sounds amazing-so I’ll be able to see changes in my own brain activity as they happen-I’ll take it home and try it out!

Well well Andrew, what can I do you for?

Hello Professor, I’m blown away by this thing! The autocerebroscope does exactly what you said that it would.

The problem is that I want to know more than which brain regions are being activated. I want to gain some insight into how they are working together to produce the workings of the mind. At the moment I can say that when I’m involved in problem solving I’m using my prefrontal cortex, but I’m not sure how the various sub-regions of this cortex are working together to solve the problem.

Okay, well how about I give you insight not only into which regions of the brain are being activated as you think, but also which neural impulses are going from one part of the brain to the other?

That sounds great, but I can foresee a roadblack; I can only process so much information in real time within my own brain as this same brain generates its vastly complex activity.

No problemo, We will give you an add-in that produces a summary of the inputs that are being sent from one brain region to the other. You may have to use memory a bit, as there may be a bit of a lag, but it should give you an even deeper insight into the workings of your own brain! I’ll see you later-take your time practicing with that bad boy.

You must have some tremendous insights by now Andrew!

To be honest, I feel that I’ve made less progress this time. When I read the outputs, well, they do seem to be a summary of very many neural impulses.

Absolutely! It’s just that there doesn’t seem to be fully meaningful correspondence between the concepts as I experience them and the information going from one brain region to the other. When I was smelling a half-empty crisp packet that I found in the rubbish the other day I could see a whole hosts of impulses in my brain corresponding to constituent compounds making up the smell. In theory these impulses based on compounds should add up to the overall sense of the odour, but when I looked at the outputs coming and going between the various parts of the brain I couldn’t see the Gestalt of the scent as a whole.

Hmm, it seems like these concepts are being produced by the interaction of various activities between various different brain regions.

But I want a real-time readout that will allow me to gain sufficient insight into the workings of my own brain that correspond to the actual overall feeling of my experience! Furthermore, if I could do as much it would be great as well to consciously change the activity of my brain to re-wire my conscious lived experience.

Er- okay…you are setting the bar rather high…but if you collect it from my assistant in the next couple of weeks I’m sure we’ll have something cooked up for you.

Yes! You’ve done it Professor! I can perceive and understand the exact workings of my brain generating this feeling, even as I subjectively feel it! Now, with a bit of effort I can tweak the activity of my hypothalamus to dampen the release of stress hormones-excellent-now I can optimise connectivity in the prefrontal cortex to improve my planning of this biofeedback process itself-soon I will have cognition second to none!

Are you okay, Professor? This is tremendous! Why do you seem so negative? Are you worried about me abusing my power?

No, it’s more an intellectual concern. What you’re saying is all well and good, but it just applies for you. Who’s to say that my experience is not generated by different brain processes, or that my subjective states of mind feel the same?

Well Professor, I’m sure that you probably do use your brain in somewhat different ways to me. In terms of how things feel, well, at the same time as the autocerebroscope is showing me in the inner workings of my brain, I can also see the nerves and how they are projecting to and from other parts of the body. Feelings are tied up with a visceral response that extends throughout the body, so I’m sure that even if we did have the exact same types of brains that happened to be wired up and working in exactly the same way, then subjective feelings would still feel different, given differences elsewhere in our bodies.

Yes yes yes, but who’s to say that for some people these workings of the brain feel like anything at all?

……Eh, I don’t know, but surely the fact that it can be the case even for one person is important? This is a clear demonstration that conscious experience is possible without having to appeal to some immaterial ectoplasm-type stuff?

Not necessarily, Allen! It may only produce something that’s conscious experience-or something like consciousness- for you. But not like qualia for most people. Without access to your experience how do I know you’re really linking the brain activity with the bare bones of qualia (as I experience it) or rather with some easy problem like how your brain is processing a particular sensory input, which may anyway be enough for you to count as qualia, but not enough to count as qualia for someone with such depth of feeling as myself?

To me, this seems like a dichotomous, either/or approach to consciousness. Even if your experience is more complex than mine, then surely if I can tell you how the workings of my brain make up my awareness of the world, then that would show that consciousness can be explained by the workings of the brain?

More complex? Andrew, the mere fact that I can engage in more complex information processing and emotion is beside the point. Consciousness is fundamental-that is, it is so simple it cannot be broken down into any simpler parts!

If you’re right, then the only way for you to know is to have the insight into your own brain…why don’t you try the autocerebroscope on yourself Professor, and see what it’s like?

I’m sorry, it gives me a tension headache. Anyway, I have some papers to write up on why human experience is irreducible to brain states.

*Andrew rolls eyes and leaves office with his new toy*

Apology 1: The device pictured is, needless to say, not the mythical final version of the autocerebroscope described in the story below, but rather an electroencephalogram (which reads the neural activity via electrodes-like all current brain imaging technologies, it is quite far from doing what gets described in the latter parts of the story below).

Apology 2: This story is influenced by numerous thinkers I’ve read over the years-sorry I can’t remember all of my influences here to attribute them. Let me know in the comments if anyone stands out as deserving more of a mention here.

Posted by AndrewAllen at 2:21 PM No comments: