Suicides are not "mental accidents" (thoughts on Ajdacic-Gross et al., 2019)

The so-called "psychotically depressed" person who tries to kill herself doesn't do so out of quote "hopelessness" or any abstract conviction that life's assets and debits do not square. And surely not because death seems suddenly appealing. The person in whom Its invisible agony reaches a certainly unendurable level will kill herself the same way a trapped person will eventually jump from the window of a burning high-rise...Their terror of falling from a great height is still just as great as it would be for you or me standing speculatively at the window just checking out the view, i.e. the fear of falling remains constant. The variable here is the other terror, the fire's flames: when the flames get close enough, falling to death becomes the slightly less terrible of two terrors.

Of course, suicide is often approached from a mental health/psychological disorder perspective. At the same time, suicide can be studied at an epidemiological level, in terms of, for example, national rates over time (questions include whether economic recessions are associated with increases in suicide rates). A provocative paper from a couple of years back took the approach of proposing an interdisciplinary paradigm for suicide research. Although it caught my eye, it doesn't seem to have had much uptake in the scholarly literature; as far as I can see, the review hasn't been cited as yet on Google Scholar (which tends to catch citations from a wide variety of academic sources).

The authors cite epidemiological research suggesting the association between suicidal ideation, suicide attempts and completed suicide is weaker than one might intuitively expect. They highlight that reasoning often begins with completed suicide and tries to work backwards to explain what caused this outcome, rather than starting with risk factors and working from ideation to attempt to death. This latter approach is important for identifying preventative measures, and also for not underestimating or under-emphasising the greater prevalence of ideation and attempts compared to deaths by suicide (there is evidence of a high lifetime prevalence of suicidal ideation in the general population).

The authors acknowledge there can be different temporal dynamics to suicide, where some individuals with previous good mental health may die quite suddenly following a severe stressor, whereas others may die following a long struggle with severe distress and previous uncompleted attempts. In the latter circumstances, the authors recognise their paradigm is less applicable. They also recognise a cognitive component to suicidal ideation, relating to appraisals of factors such as whether one has hope for the future. This weakens the idea of a paradigm where suicide is understood as a "mental accident".

Although suicidal ideation may be deliberative, a lack of resistance to such ideation may be much less deliberative. They highlight the importance of broader situational factors such as economic recession and austerity in precipitating suicidal ideation, along with an increase in help-seeking behaviour over the last few decades. However, and perhaps more importantly for the "accident" hypothesis, they also cite immediate situational factors relating to the availability of lethal methods, suggesting that the high impact of easy availability of lethal methods, such as having a firearm in one's household, suggest that completion may be prevented by relatively small hurdles. However, I think the authors would admit that this is more to do with suicidal impulses (of sufficient strength to drive an attempt) sometimes being relatively transient, rather than death by suicide being understood as a "mental accident".

I'll admit the title of this article caught my attention. Framing suicide as an accident seems highly counter-intuitive. However, this review ultimately left me unconvinced that even a subset of deaths by suicide should be thought of as mental accidents. In my mind, an accident doesn't involve genuine intent, and for a death to be classified as suicide it must surely involve some level of intent. In my opinion, what this article does indicate is that death by suicide involves deliberative suicidal thoughts combined with a loss of control of competing motivations. Although research in suicidology and efforts in suicide prevention may have much to learn from work in the area of fatal accidents that actually are accidental, I fear the authors may have prioritised a provocative title/statement of their thesis over a more nuanced summary of what they are really saying. I hope I'm not just attacking a straw argument here, but I do regret the possible tabloidisation of scholarly publishing, particularly with a subject as serious as this.

I felt a funeral, in my brain

Posted by AndrewAllen at 7:42 AM 2 comments:

IASSIDD Webinar: People with intellectual disability and family carers during the lockdown 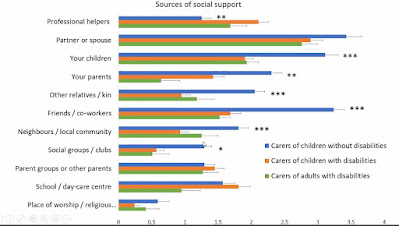 On 2nd February 2021, I attended an interesting webinar from the International Association for the Scientific Study of Intellectual and Developmental Disabilities (IASSIDD). Three different talks treated of the situation of people with intellectual disabilities and the COVID-19 pandemic and associated lockdown.

Faridah Ali Chang: Support for families and their high needs children during the COVID19 pandemic

Faridah Ali Chang (Rainbow center), works with clients caring for children aged 3-35. At the Rainbow center, there's an emphasis on carers recognising their own stress triggers or risks to their mental health. They identify high-risk families or people with greatest needs. Singapore went into full circuit breaker mode with the pandemic-all schools were shut down, and parents had to move to home-based learning. There was a significant rise in domestic violence and a large increase in calls to mental health hotlines.  Many families had lack of space. The Rainbow Centre continued coaching with caregivers online. They still accepted new referrals as well. Faridah Ali Chang gave an example of a mother with an autistic son who was having a lot of "meltdowns" and a poor sleep pattern. She was becoming depressed herself. She engaged in WhatsApp support with keyworker at Rainbow and found the coaching helpful, even if it was provided entirely online. Help included visual support system to organise her child's daily routine, as well as community supports-the parent in question went on to help/advise other parents as part of the community support.

Paul Willner & Biz Stenfert Kroese:  Effects of the pandemic on informal caters of adults and children with intellectual disabilities in the UK

Paul Willner, Swansea University, has been involved in a clinical trial for PTSD for people with ID. However, this project was paused in March. His team designed a survey at speed to find mental health effects of lockdown on family carers of people with ID. They surveyed carers of adults with disabilities, children with disabilities and children without disabilities (Willner noted the sample was relatively affluent). They also interviewed a small subset of those surveyed, and assessed feeling of being "defeated/trapped" as well as anxiety and depression. People with children (including adult children with ID) reported worse outcomes compared to a comparison group of people with children without ID. Depending on cut-off points for clinical depression estimated with the Patient Health Questionnaire, carers for children with ID had 4-10 times higher levels of depression. Notwithstanding the sample size was limited, the effect size for this effect was substantially higher than suggested by pre-pandemic meta-analytic results, suggesting the pandemic had rendered this differential more severe. Interestingly, although family carers received more social support from professional helpers, they received less social support from family, friends and neighbours.

Biza Stenfert Kroese described more in-depth interviews with these participants, who spoke of feelings of abandonment, as well as being stigmatised by people around them-there was suspicion that they were breaking rules around lockdown, although they had permission based on their sons'/daughters' needs for exercise etc., with bystanders in some cases claiming that the person didn't "look disabled". There was also fear of challenging behaviour, powerlessness or uncertainty of when things would change. Policy implications discussed include providing more key workers (for adults and for children with less complex needs), improving mental health awareness for nurses/care workers working with clients with ID, and creating more community/peer supports, as well as the utility of encouraging neighbour support (similar to what is done for older adults in the community).

Regi Alexander: Guidance for the treatment and management of COVID-19 among people with intellectual disabilities

Regi Alexander pointed out excess mortality from preventable causes in people with ID even pre-COVID, but the situation is more stark under the pandemic. He underlined that distress is a normal response to disruption to normal routine, particularly where one is dependent on routine. Many people with ID also dealing with loss, either from the someone's death or someone is no longer available or close. He also emphasised the risk of diagnostic overshadowing (i.e. all problems being attributed to a diagnosis ID/mental health issues), meaning other problems and underlying causes might be missed. Diagnostic overshadowing is concerning when you see the statistics about excess mortality. In this vein, he also highlighted a high degree of physical health problems in people with ID.  He also indicated that there a number of relevant resources available on the NHS radiant website, and the resources from Beyond Words are useful for explaining issues around COVID-19 and the lockdown etc. to people with ID.

Posted by AndrewAllen at 1:27 AM 2 comments: