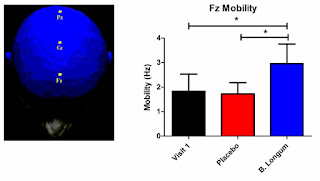 
The dream Hobbes refers to is, of course, shared by many outside of the United States. There is an obvious demand for dietary supplements that can improve health in some way. Given the general lack of adverse side effects, probiotics represent an attractive opportunity for improving health.

Previous research has indicated that consuming a fermented milk product with probiotic can alter a network of brain regions associated with emotional-as well as visceral-processing. Sadly, the article did not report how people performed on the task the researchers used. As this task just involved classifying emotions on faces, I suspect that maybe performance was too close to ceiling to demonstrate an effect of the probiotic.

As noted in a recent post, we found that participants reported less stress over weeks of consuming probiotic compared to a strain of Bifidobacerium longum. Interestingly, we also found that participants performed best at a test of visuospatial memory after having consumed the probiotic strain. This particular memory test we looked at (paired associates learning) is dependent upon the hippocampus, a region of the brain that can be affected by cortisol secretion following stress. It may thus be the case that a lower level of stress may account for the improved performance on the memory test.

We also assessed electroencephalography (a method of measuring brain activity via electrodes placed on the scalp), and observed that there was enhanced activity at frontal regions following probiotic consumption, consistent with improved memory. This is not just another way of showing what had already been demonstrated with the participant's memory performance, as frontal processing is associated with top-down processing (i.e. processing relating to motivation and broader context, as opposed to bottom-up/driven by the sensation or perception).

However, the picture is complicated by a more recent study from our group seeking to show similar effects with a different probiotic strain; the results here did not indicate effects on cognition (or stress), despite the fact that we used the same assessments, and despite very promising initial results in animal models with this second bacteria. It thus seems to be the case that specific effects go with specific bacteria. Perhaps we are just at the beginning of understanding how gastrointestinal health can be harnessed to improve brain health.

Related posts:
Probiotics and stress
Myelin and the gut
Irritable bowel syndrome
Posted by AndrewAllen at 4:51 AM No comments: 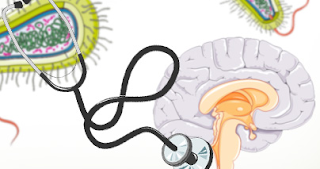 Posted by AndrewAllen at 3:43 AM No comments: