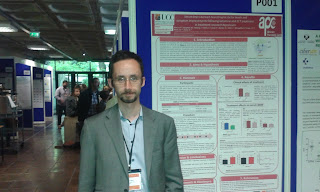 Early June. I am back where I first studied psychology, Trinity College Dublin. Crossing the historical front square for the unapologetically brutalist architecture of the Arts Block. It’s the International College of Neuropsychopharmacology (CINP)’s thematic meeting, and the theme of the meeting is stress, inflammation and depression.

The charm of a thematic meeting is that one knows that there’s going to be a lot of work that’s of interest to you. I make no secret of the fact that I’m not a big fan of enormous, “GloboConference” type meetings. I can recall a least one occasion when I was presenting in a session where the theme was clearly “a bunch of studies that have nothing to do with each other, but couldn’t be matched up with anything else on this day”. Ah well, maybe I’m just bitter because a 1,000-strong poster session can confront you with your own insignificance as a little researcher star in the vast galaxies of Science.

When I heard my poster number was to be P001 I was nervous that this meeting would have the opposite problem: a lack of other posters. However, these nerves were unjustified. There’s an active session of over 100 posters, with topics of interest to me such as depression, ketamine and probiotics being covered.

With a keen focus to the meeting there is a risk of repetition at the talks. However, although some introductions do cover some common ground, this is a complex enough topic for there to be plenty to cover, and each researcher brings something different to the party. NB: they also (generally) skip through stuff that previous speakers have covered already in their earlier intros-let that be a warning not to spend an entire conference prior to your own talk locked in your hotel room practicing your PowerPoint! The speakers often differ in their presentation style, but all are accomplished researchers with plenty to show.

A highlight is getting a chance to meet and hear from Ron Duman, an influential figure in the idea that neurotrophic factors in the brain might be implicated in depression. At his talk he discusses new pathways linking inflammation to depression that he is interested in. Like most researchers at the event he turns out to be a very approachable person too, as we find out at the social evening in Temple Bar. (The touristy trad band at the venue wind up some of the indigenous crew, but what are you gonna do? Better that than the wave of Weatherspoon’s about to descend upon our poor capital.)

Another talk of interest is by Phil Burnet of Oxford. He discusses recent findings that prebiotics (fibres that help the growth of friendly bacteria) can lead to a reduction in cortisol output, as well as changes in processing of emotional stimuli. These findings chime nicely with some results that Timothy Dinan presents, indicating that probiotics can lead to a subtle reductions in stress. Speaking of senior figures from our group, the mighty John Cryan also gives a highly engaging talk covering broad ground, taking in stress as well as hunger-related hormone ghrelin.

Future thematic meetings from CINP will be worth watching out for people interesting in neuropsychology and mental disorder, although be warned that the talks can have a heavy focus on molecular pathways and preclinical work. If you want the "globo" equivalent, than check out next year's World Congress.

Posted by AndrewAllen at 3:04 PM