Exhibition review: "We Do Not Leave Pyramids" 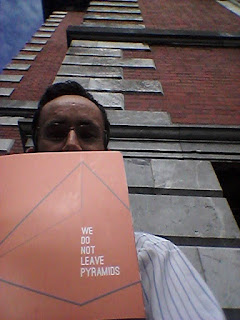 And if you must build pyramids along the way, build them in the knowledge that they will soon crumble and disintegrate, disappearing in the distance as you move onto the next phase.
Chris Clarke, from the program foreword

I try to take in art galleries when I get a chance; I particularly enjoy going to final year exhibition. This review of 2015's final year art exhibition at the Crawford is somewhat belated, but then again maybe it's good to write about these works a little later, if only to show that they are not just vanishing into the ether.

On the topic of final year exhibitions, I remember severely disliking a series of paintings at the National College of Art & Design, Dublin a few years back. They were were very small drawings that depicted vaguely gross activities, but drawn in the manner of a 9-year-old child. Even though I can enjoy ugly art (Bacon springs to mind) I didn't care about the artist's point, it was just lacking in skill. 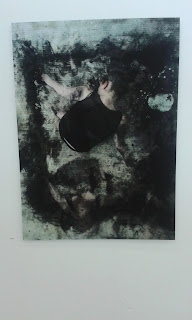 One set of images that strikes me is Elaina Walsh O'Reilly's pictures. Although these images may not be pretty, they are the antithesis of that kind of delibrately childish, wilfully shit art that annoyed me at the NCAD exhibition. They have depth and richness that shines through any layer of dark and grot.

They are inspired by melacholy. The deep greens and blacks of these images wash a wave of sadness over the frame. The human figure could be swimming or dancing, but the face seems sucked downwards into the heavy cloth. Walsh O'Reilly describes the figures as trapped in a perimeter that on one level can be easily broken. However, to me the density of these images hint that there is some level of difficulty in moving away from these feelings. 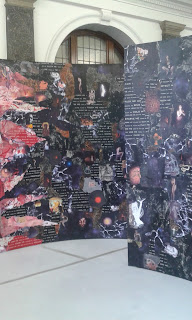 Jennifer Ahern's work is a walk-in spiral wall of collage. It reminds me somewhat of the artwork of "In Utero" by Nirvana, or a less violent version of "Reek of Putrefaction" by Carcass. In fact, with the torn fragments of text this could be like many postmodern album notes for Radiohead, ...Trail of Dead, ZooTV-era U2 etc.

Despite this initial impression of image overload, the focus on the female body, and how our media represent it, means this is not just a (comment on) info saturation. The changing dominant colours of the spiral give it the feeling of a life cycle, However, the spectre of objectification hangs over the collage. The body can be exposed at any point-wherever you go, there you are, and of what use are you? 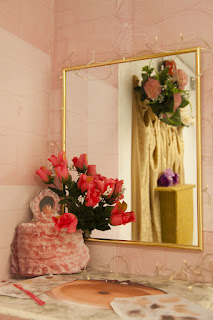 Two works touching on similar themes also catch the eye. Victoria Callinan looks at the concept of the selfie; composing a particular image of oneself for the online world. Killian O'Dwyer's work is about gender performativity through the lens of "low-brow" culture (you can hear the bassline of "Anaconda" pounding as you approach his installation). Besides the thematic similarity between these two pieces, they both use the installation space to the full, turning artwork into a bedroom. Although O'Dwyer's work seems at some level to be confrontational in its use of pornography and USA hubris, and although the implicit fug of moral panic and cyberbullying hangs over Callinan's, there's a strange homeliness to these voyeuristic and consumerist pieces that suggest they've both caught a little bit of the zeitgeist.


Obviously these are just snapshots of a small minority of the work at the exhibit. As with any of these things, in a few years most of the students won't be working full-time as artists. But a few of these pieces remind me of a snippet of a review on the blurb of Euginedes' debut novel "Virgin Suicides": they are not just "promising"-they have arrived fully formed.

Related posts
Creativity and two modes of thought
I felt a funeral in my brain
Posted by AndrewAllen at 3:38 PM