From the depths came the form: gut microbiota and brain cells 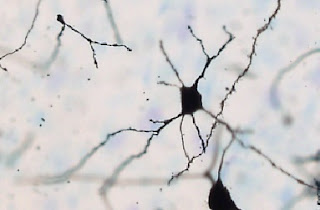 As I mentioned previously in a recent post, germ-free rodents have given us a greater understanding of the interaction between the brain and the gut, with animals deficient in microbiota displaying altered anxiety-like and social behaviour.

New research (open access research that is!) from the mighty APC Microbiome Institute has indicated alteration in the brains of these animals. Compared to normal control animals, germ-free animals had increased volume of both the amygdala and hippocampus, regions of the brain associated with processing of emotional and stressful stimuli. This was despite the fact that overall brain volume was not changed, suggesting a proportionate increase in regions of the brain associated with the kind of function that is demonstrably impaired in germ-free animals.

The researchers decided to look further, examining not only regions of the brain, but also brain cells. Using previously established methods they were able to categorise the neurons into different classes. They analysed the extent and complexity of dendrites (the branch-like structures at the end of neurons that receive neurochemical input from other neurons). They found more highly developed dendritic material in a number of different types of neurons in the brain regions of interest. It would thus seem that the lack of microbiota is impacting at a more microscopic level within the brain.

The authors point out the regions of the brain in which they found these alterations interact with (among other things) the hypothalamic-pituitary-adrenal axis, which is responsible for hormonal responses to stress. The impact of the microbiota on these specific brain regions are thus likely to impact upon other brain regions, notwithstanding a lack of change in overall brain volume.

The outstanding question is how the gut microbiota has such a striking effect upon the microstructure of the brain. There a number of different candidate explanations. For example, there is evidence that gut bacteria can use nutrients from the diet to produce neurochemicals. However, the process whereby these neurochemials within the gut lead to serious changes in the brain remains (to the best of my knowledge) somewhat of a mystery. Research that brings us closer to solving this problem will no doubt be generating a lot of buzz in the coming years.

Related posts:
Wrap you brain with germs
Posted by AndrewAllen at 1:44 PM