Conference review: "Research and Healthcare Responses to the Challenge of Brain Conditions in Ireland" 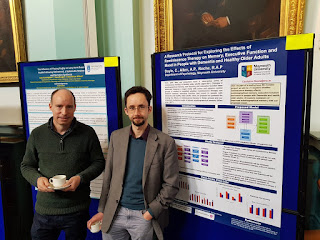 With Brain Awareness Week underway, the timing was ripe for this week’s joint conference of the Neurological Alliance of Ireland and the Irish Brain Council: Research and Healthcare Responses to the Challenge of Brain Conditions in Ireland. It was a half-day event, packing a lot of interesting talks into a slim timeline.

Mark Ferguson of Science Foundation Ireland (SFI) opened the day with a discussion of SFI’s past and future, underlining SFI’s extensive collaboration with industry. He also highlighted plans to create a more targeted funding mechanism for PhD students; previously, although a lot of PhD students have been hired via SFI funding, this has been a lot more “top-down”, i.e. coming from Professors with the more major research grants SFI is known for.

Speaking of which, David Henshall’s talk on FutureNeuro struck me as a real template on how to get a large tranch of funding from SFI, but more importantly it represents an ambitious research program targeting motor neuron disease and epilepsy. The project aims to further knowledge in both diagnosis and treatment for these disorders; for example, how molecular therapies (which tend to be relatively bulky) can cross the blood-brain-barrier. The work of FutureNeuro also covers the increasing electronic storage of health records, with a view to creating greater use of genetic information as this becomes recorded in a greater number of patients.

The Promethean ambition of Henshall’s work was matched that of Ian Robertson, who discussed the work of the Global Brain Health Institute in training research fellows, identifying risk factors for the development of dementia and initiatives to prevent/offset the development of dementia. He spoke about cognitive reserve (a favourite topic of Robertson’s), as well as how dopaminergic function in striatal regions may underlie what is ostensibly more cortically-based decline in cognitive performance in older adults. In closing, Robertson paid emotional tribute to Chuck Feeney, highlighting how Atlantic Philanthropies (which recently came to a close) is to thank for the Global Brain Health Institute.

Cora O’Neill highlighted her work at the Cork Neuroscience Centre at University College Cork, linking the brain-gut-microbiome axis to a molecule associated with Parkinson’s disease (alpha synuclein). She highlighted the broader area of changes in the microbiome with age, and particularly between residential, nursing home care and older adults living in the community. O’Neill also gave generous coverage to work by John Cryan and Ted Dinan at UCC, including a mention of the dementia caregiver study I have worked on with Gerard Clarke.

At coffee/tea it was great to see a couple of posters looking at caregivers for people with other serious neurological problems, including one on carers for people in a persistent vegetative state as well as a poster on acquired brain injury in general.

The second session of opened with a more frontline clinical perspective from Timothy Lynch, who spoke about neurology services in Ireland. Although things are improving in terms of waiting lists, there is a need for greater multidisciplinary teamwork in Ireland; there is a serious lack of clinical neuropsychologists, and even if all the necessary funding to hire them were there, there still wouldn’t be enough suitably qualified people to fill the posts.

The meeting closed with by a representative of Fred Destrebecq, Executive Director of the European Brain Council, highlighting the health economics of brain diseases and mental disorder, which is somewhere in the order of €800 billion for Europe. He also drew attention to the Value of Treatment white paper, which outlines unmet need in early diagnosis and treatment of mental/neurological disorder in Europe.

The meeting as a whole indicated the scale of health challenges facing our society. It demonstrated the ambition of those researching this most complex area, and the determination of those treating the people these issues affect.


Why not check out the "Psychology in Mind" podcast with Gareth Stack: https://garethstack.com/2018/01/30/psychology-in-mind-episode-1/
Posted by AndrewAllen at 7:39 AM