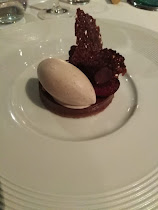 One Pico is tucked away in an assuming lane of Molesworth Street. I previously had dinner here during a UCD conference on medical humanities. I was perhaps a bit lost in conversation with collaborators to really focus on the food.
When it comes to social distancing, I was previously at another, unnamed restaurant that had us at what seemed like rather close quarters with other patrons (albeit separated by screens). Here though, the tables are suitably distanced from each other. There's a pleasant ambiance, with lively jazz at low volume and friendly waiting staff.
For starter, I had pea velouté-earthy flavour, with dried peas adding nice textural contrast. There was also a Coolea cheese gougere, that seemed to be calling to be eaten in one mouthful, though I spaced it out to two. My wife had seared scallops in a crab bisque-major hit of sea and umami. It had a perhaps unnecessary addition of summer truffle on top - while adding a dash of prestige, this didn't quite integrate with the dish as well as it might. Nonetheless, it didn't impair what was otherwise an excellent dish.
For mains, I had gnocchi-this is in done a lot in veggie fare, although variations on sweetcorn were the real star here, appearing as both seared corn, deep fried in a pastry shell and flavouring a rich sauce. Perhaps it's already making a comeback of which I was unaware, but it's nice to see a vegetable that isn't super hip getting a chance to shine. My wife had turbot, which was decorated with caviar and accompanied by a scene-stealing courgette flower stuffed with langoustine mousse.
For dessert, my wife had a lemon verbena bavarois with strawberries, elderflower and sorrel ice cream-a beautifully balanced and delicate dessert. I had a chocolate délice with black cherry and cherry ice cream. A classic pairing for anyone who can recall black forest as a childhood treat, this dessert was also well balanced, even though the chocolate was of a richness approaching that of "La bombe" in "Guess who's coming to criticise dinner" territory (as well it should!) Coffee was accompanied by a salted caramel truffle and a white chocolate with a gooey strawberry filling.
We got a bottle of archetypal Soave with a nice citrus feel to accompany dinner. We took most of it home and enjoyed with a leek risotto the following evening. I managed to resist the temptation of the dessert wines. I can definitely recommend if you want to go somewhere nice for an occasion.
Related posts
Restaurant review: The Greenhouse
If you like this post, follow me on Twitter: @ArchivePsych
Posted by AndrewAllen at 4:11 AM