Book review: "The Art of Losing Control" by Jules Evans 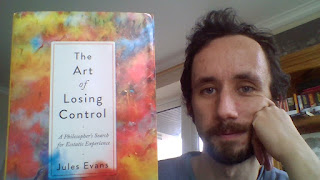 We were guided through intense emotions, like buttons on a TV remote. And the strange thing is, I felt each emotion. Are we so easily manipulated?
(p. 143)

I've won via a book thanks to a competition at The Psychologist magazine. It's a thesis on ecstatic experiences by Jules Evans, philosopher and bon vivant (in a broad sense of the term). Although the term "ecstasy" is used to describe religious or sexual experience, Evans highlights that many different forms of activity can be associated with this type of experience, which is not just about extreme happiness or pleasure but a loss of the sense of self.

Evans does not simply wish to sit at the sidelines but rather engage in some of the kinds of experience he discusses in the book. Sometimes he draws on past personal experiences, at other times he engages in new activities as research for the book (his attempts to dip his toes back into organised religion veer between endearingly awkward and slightly off-putting, as congregants and preachers hungry for young blood latch on to him or try to use him as a mouthpiece). Unsurprisingly, when dabbling in these various activities Evans often fails to become ecstatic. However, he draws on characters from the past who have abandoned themselves to ecstasy more than Evans himself, from sexualised cult leaders to preachers who found ecstasy in the natural world.

Indeed, like many philosophers, Evans has a healthy interest in history. He traces much of the reaction against ecstatic experience (or most ways of seeking ecstasy) to the Enlightenment. He posits that at this time an increasingly materialist worldview was increasingly hostile towards ecstatic experiences where sense of self (and therefore self-control) is lost.  I mention "most ways of seeking ecstasy" above, as the ecstatic appreciation of the natural world may be a form of ecstasy less antagonistic to Enlightenment values; people from Dawkins to Tim Michin have highlighted how we shouldn't need God when we could be happy and in awe of the wonder of the Natural World. Evans himself insists that he remains agnostic about religion, although he does seem to want the skeptical reader to consider the spiritual realm.

In delving into the world of ecstasy, a recurring theme is the danger underlying the loss of self. Besides the hazards of dangerous drugs, Evans highlights the negative reaction some people have to meditation. He even suggests there is a dark side to the seemingly innocuous ecstatic appreciation of the natural world; there is a risk of reading an excessively benevolent intention into Nature. However, Evans also suggests a further risk is that ecstasy in nature could distract from a higher power/transcendence (his nudging the reader towards the spiritual again?) This counterbalance serves as a useful rejoinder for the tendency of many self-help types to give an uncomplicated view of phenomena from romantic love to peak experience and flow.

Perhaps the boldest chapter is that which highlights war as a means for searching for ecstasy. Evans mentions Malthusian philosopher John Gray's reference to war as being a major part of the human psyche. Evans does not go as far as Gray in suggesting war as a universal drive, but he does delve deeper into suggesting a number of different reasons why war and violence can be a means to annihilate the self, such as a loss of self to a "greater cause". Of course, with war, unlike most other ecstatic pursuits, when the pleasure fades, you have not just temporarily annihilated the self, but permanently destroyed the other.

This book will raise more questions than answers, which is almost inevitable for a book that deals with a relatively under-explored phenomenon from such a wide-ranging perspective. Is there anything wrong with a life of modest happiness, rather than overwhelming ecstasy? Why is it that ecstatic experience can be turned on/off for many people engaging in quite diverse activities? Why, for so many people, is the self a burden that needs to be shed?

Related posts
Book Review: "The Stress Test" by Ian Robertson
Mindfulness: In defence of sometimes being in the moment
Posted by AndrewAllen at 3:55 AM