Today this supremely beautiful landscape seemed to me to be almost unreal in its perfection. It produces a tonic effect on me…I felt a kind of aesthetic exhilaration, a mental exuberance and keenness of perception, a complete environmental euphoria. (John Fowles, “The Journals: Volume 1” p. 168)

The knot is tied. Daniela and I are honeymooning on a Greek island-Karpathos. I am reading the journals of a favourite writer (I had just recently picked these up in Cardiff, having previously planned to re-read his famous novel with a Greek island setting, The Magus). In his early twenties, John Fowles’s initial resentment and self-absorption in England change to a more outward focus on the extravagant characters he encounters when he takes up a teaching job on the Greek island of Spetsai-possibly the most extravagant of which is the landscape of the island itself. 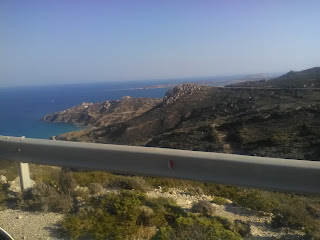 From visiting the in-laws in Italy, I am by now used to the fairly urban Verona and Bergamo airports. Landing in Karpathos airport, one is struck by the almost alien landscape. It is a little bit like a grey/deep green version of Red Rocks in Denver. Although the sun takes the temperature into the high twenties, the island is windy, with enough of a breeze to make it feel like low twenties much of the time.

We are honeymooning with an Italian tour operator (Irish tourists are a novelty on the island) who take us from the airport to the Aegean Hotel, Amoopi. A polite yet brilliantly deadpan Serbian waiter attends to us at dinner. We dine a few times at a taverna down the road. The highly extroverted husband & wife proprietors engage their patrons/audience not only with cuisine that often incorporates their mini-farm by the taverna, but also with anecdotes and conversation, the hijinks of their dog, a chance to hold newly-born chicklets etc. They also do a mean Greek coffee. 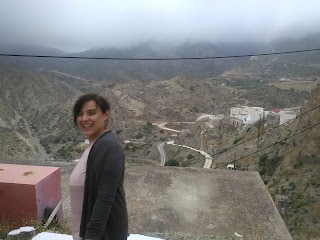 Our first excursion with the tour operator is to Olimbus. The various shops sell bespoke items, and the keepers call to the tourists as they stroll past to check their wares. (I look the archetypal tourist in shorts, T-shirt and a Karpathos baseball cap). In one place we pick up a necklace made up butterfly eggs. Another shopkeeper, who sells us a mug she made herself, is as comfortable discussing her life as an architect in Athens outside of the tourist season as she is asking us what age we are.

We hire a small car. I have never driven on the right before, and by force of habit I frequently reach left for the gearbox. In comparing our relative levels of stress when I am driving versus when Daniela is driving, I decide that I should stick to acting as navigator more often than driver. The car is used to travel to various beaches around Karpathos. Starting from the beach outwards, the water starts transparent, then aquamarine, then azure, then a deep blue. Most of the beaches are enclosed by cliffs or hills reaching down to the outskirts of the water. When swimming I tread water to admire the landscape, feeling a touch of Fowles's "aesthetic exhilaration".

Our second excursion with the tour operator is to the island of Saria, the tiniest bit North of Karpathos. Although some people travel out on a semi-regular basis, when the boat pulls in the island it is quite deserted apart from three mules observing us from the rocky beach. We then walk up a steepish ascent under direct midday sunlight (some of the people on the tour are older-I have to wonder how everyone manages). On the descent we take slight divergence from the way up; there is a dead sheep lying on the path. I was reminded about a reference to travel research I made in an Irish Indo piece highlighting how satisfaction tends not be higher during the initial part of travelling, when one is actually doing the travelling to the place you want to get to! 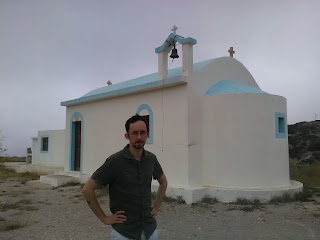 Towards the initial high point of Saria we encounter a beautiful small church. There seem to be very numerous Orthodox churches dotted all over the island, although they also tend to be either small or very small (a few of them would struggle to accommodate a full family, were they Catholic churches of yesteryear). The churches usually have a similar style in terms of the icons depicted. One less small church we visit elsewhere is besides a large floor mosaic, much of which has been lost in time. 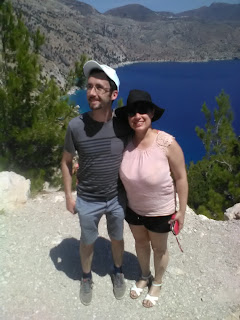 Following Karpathos, we return to Verona, Italy for a few days, for some quieter time in Italy post-wedding excitement, when we can settle some debts and run around with the niece and nephew. Then the return to Ireland and relative normalcy-assembling a wardrobe for our apartment and gearing up for more research at work. The honeymoon is not just another holiday. There's an expectation of creating memories that one holds on to for good. I don't think I'll forget the sunset view from the Aegean Hotel at dinner, overlooking the footpath to the hills that stretched to the sea.